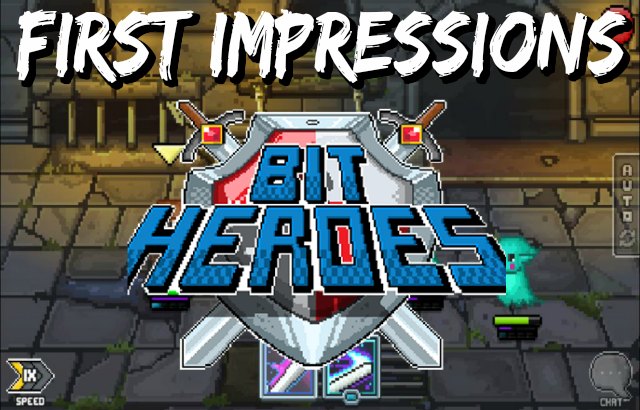 It’s not everyday that an indie game created for an indie website gets plummeted into super stardom. But that’s exactly what happened to Bit Heroes, and that’s how it caught our attention. Bit Heroes is a free to play MMORPG on Steam. It’s hugely inspired by classic RPG games and features 2D pixelated graphics and an interesting turn-based combat system. I say interesting because there’s a companion party system that is also a form of progression. This once Kongregate darling is doing rather well on Steam at the moment, so here are three quick thoughts about my first impressions of Bit Heroes.

From the press kits and the teaser trailer, it might not be a looker. That totally changes when you download and launch the game. (Download size is excellent too if you’re wondering). Set in the typical fantasy world, Bit Heroes has a rustic charm that tries to recapture your nostalgia for past RPG games.

It reminds me of some of the old JRPGs that my sister used to play on the old GameBoy we shared. Bit Heroes brings all those qualities to the forefront. Its pixelated graphics are well colored. Its opening starter area is vibrant, and feels like the start of a Pokemon adventure. The controls are excellent. No WASD to use here, all you’ll need is your mouse.

The most surprising aspect of Bit Heroes is just how polished it is for what it is. It’s got a lot of content I don’t expect from a game like this – Dungeons, PvP, Raids and even a guild system. If you’ve got a bunch of friends to play with, this might be a blast. To complement these mechanics, the turn-based combat system and companion components adds a small layer of strategy and depth.

Combat in dungeons happens organically. You bump into a roaming baddie, and combat automatically begins. You then take turns dishing out attacks, and how many moves you get depends on the Agility stat of your character. It’s old school when it comes to combat, so don’t expect flashy animations. You’ll gain experience points from your dungeoneering, and each level up provides you with simple yet complex decisions on how to build your character. You only get three stats to improve. Agility as we already know for more attacks per turn. Stamina increases health, while Strength deals more damage. I like the simplicity of it all, and with a party of friends, each player can build the right group to tackle later content together. It’s the companion system I enjoy the most. Out in the world, you can fight and capture creatures to enlist in your party. This changes the turn-based combat dynamics somewhat, and for the better.

Once you get a little taste of how it plays and what it can do, there’s a chance that Bit Heroes may have you hooked. The glorious part about it is, you can play it everywhere. It’s on web browsers, since that’s where it was born. It’s now on Steam. And of course, you can also play it on your mobile devices. Just look up Bit Heroes in Google Play or the App Store.

It’s just one of those games that offers casual fun and a non-committal time investment which makes this perfect for a dungeon romp or two on the subway to work.