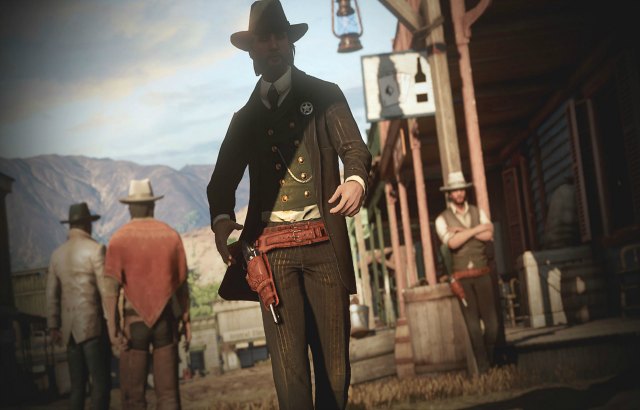 Wild West Online had its closed technical alpha 1 last weekend, and we jumped in to check it out. The purpose for the first round of testing is to ensure the game’s technical side is up and running well. That meant server stability and basic gameplay functionality. That still didn’t stop us from having and making our own fun. From what we experienced in the alpha, WWO has a lot of potential to be a really fun game. Yes there are gripes, but we’re keeping in mind that this is still in development and will wait till the final release to review.

More than anything else, Wild West Online’s world feels excellent and oddly familiar. The last true great Western game was Red Dead Redemption, and the influence of that game rubs off a lot here. I love watching the dust-rails that your horse leaves behind when you’re riding around. The design of the various towns feel great, filled with saloons, gun shops, banks and outfitters. They look authentic which is really important for a game of this setting.

The animations don’t complement the graphics

Where I hope the developers take a closer look at is with the game’s animations. WWO is a first person/third person shooter, and gun-play is bread and butter here. But shooting just doesn’t feel all that great because it lacks weight or impact. There’s hardly any recoil when you fire, which I hope they add in the future. The same can be said about run and jump animations. It’s on par with previous early access titles that makes me cringe, stuff like World War Z, if anyone remembers that. The graphics of the environments and character models themselves looks good, so all it needs is the gun play and character animations to get better before it becomes a complete package.

It has the right gameplay systems

The alpha was void of all PvE, so players had to make their own fun with PvP (besides testing the game for bugs of course). Needless to say, what systems I encountered has left me feeling excited. The whole reputation system involving your character either becoming a bandit or on the side of law is fun – it’s sandbox. Choose how you play and other players will react to what you do. I killed a player who was mining ores out of town, getting myself a bandit tag. He and a few others chased me around the map and made me pay. We had a stand off too, roleplaying using the in-game voice chat, and that made things even better. I’ve not had that level of chaos and fun since Day Z.

But let’s not forget about other systems in play. Guns are a core feature for an MMO in this setting, and the developers look to have put in some major work in that department. Every gun has stats that you can customize and upgrade. There’s skins as well, which will feature in the final release. Meanwhile, there looks to be a housing system which is instanced, and there’s even mini-games in town like gambling on poker which you can physically play.

All in all, the tools are there for Wild West Online to be a hit. Keep your eyes on this one, folks.