5 Reasons To Be Excited For World of Warcraft Patch 8.1: Tides of Vengeance

5 Reasons To Be Excited For World of Warcraft Patch 8.1: Tides of Vengeance 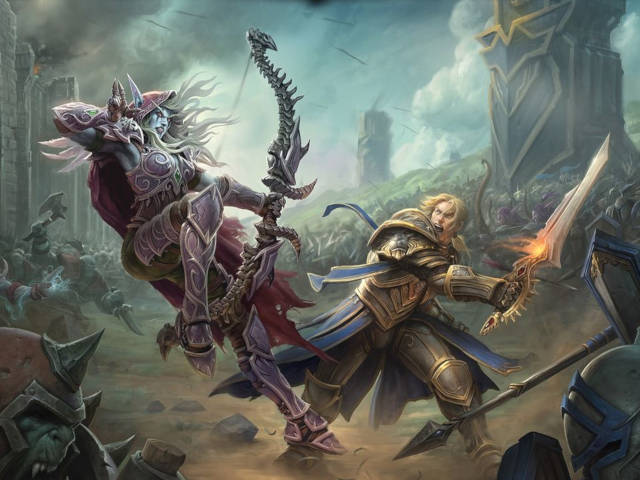 Tides of Vengeance will be World of Warcraft’s first major content update. It’s scheduled to enter PTR this week, with a release date coming soon. More excitingly, this patch may be the answer that solves many of the concerns from Battle for Azeroth’s launch. It introduces a plethora of new content like an extension to the War Campaign story and more. Here’s why you should be excited for Patch 8.1.

From a story perspective, players will argue that BFA under-delivered. It took an in-depth view at the narratives featuring Jaina Proudmoore and Talanji, while leaving out other major characters. For the most part, it works as the writing is more than decent and new characters have emerged. In 8.1 Tides of Vengeance, prepare to be bombarded with more story, and it’s the plot line we all want. Data miners have uncovered a central story-line involving ousted Horde legend Saurfang, a return of Voljin and more.

We already know the War Campaign will add more story chapters, yet it remains to be seen if these returning characters will be involved. Oh and before we forget, Tyrande also returns with a new story-line. She did have an exchange of words with Saurfang on the Darkshore, so it all makes sense. 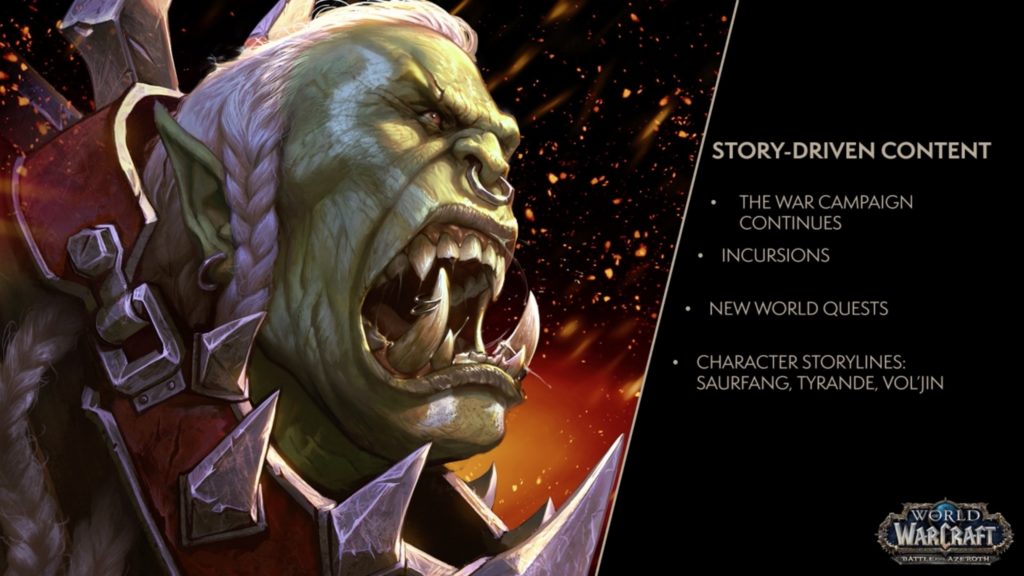 World of Warcraft is about to add Incursions to Battle for Azeroth in Tides of Vengeance. This new world content works very similarly to Legion’s Invasions, but it’s now done by the opposite faction’s forces as opposed to the Burning Legion. This simply means that leveling characters can participate in Incursions and earn a large amount of experience points for leveling up. You can take part in Incursions while leveling if at least one character on your account has unlocked World Quests. This is a great addition and will be much welcomed by players who are leveling alts.

The Battle for Stormgarde Warfront has been out for close to a month and so far, so good, even if a little repetitive. Running Warfronts are quick, with a sure fire way to earn iLevel 340 gear which is handy for gearing up alts. With 8.1: Tides of Vengeance, a new Warfront is entering the fray. The Battle for Darkshore will focus around the Night Elves and the Forsaken and features new improvements from the previous ones.

The Battle for Darkshore starts with the Horde controlling the area, while the Alliance starts of in the contribution phase. The open world zone for Darkshore will also receive a revamp with max level rare enemies and quests showing up once live. 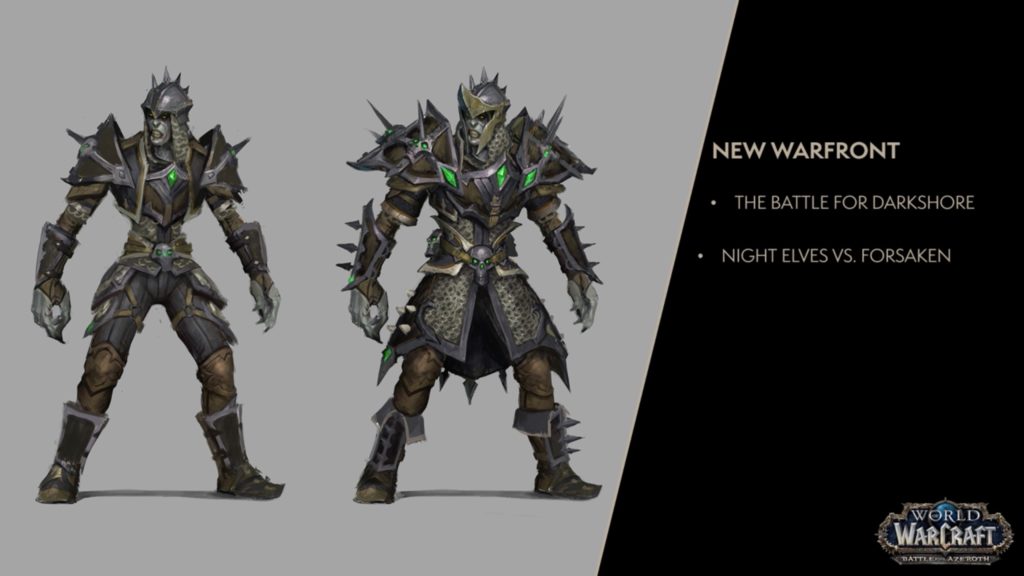 From all the new content in Battle for Azeroth, Island Expeditions are definitely the wild card. You either love it or you don’t. Regardless, two new ones are coming with the new patch. Jorundall and Havenswood are their names, so expect to see new landscapes, events and enemies. These islands will have Holdouts that you can trigger and new Azerite Extractions – bases players control to increase Azerite over time. 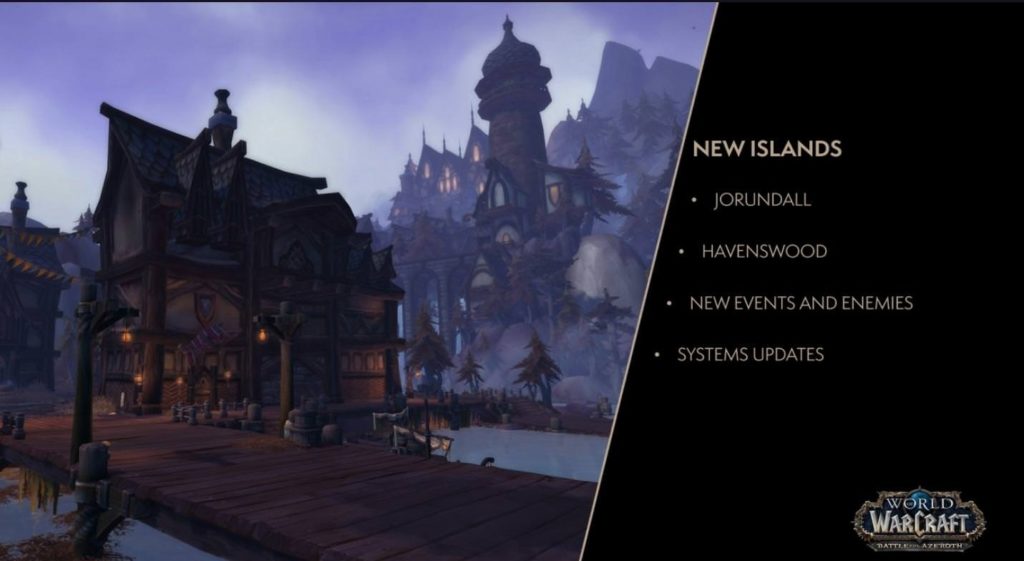 And if that doesn’t satisfy your pallet, there’s two new raids coming with Tides of Vengeance. Firstly, the Siege of Zuldazar. For the first time in history of WoW, both factions will have a different story experience in a raid. Only after finishing the six new bosses, can players find out what happen from the Horde’s perspective.

The second raid is the Crucible of Storms, which comes out some time after Siege of Zuldazar. The raid will have story and supporting content, and will add more to the Stormsong Valley quest line. We hope to see more of Queen Azshara here. 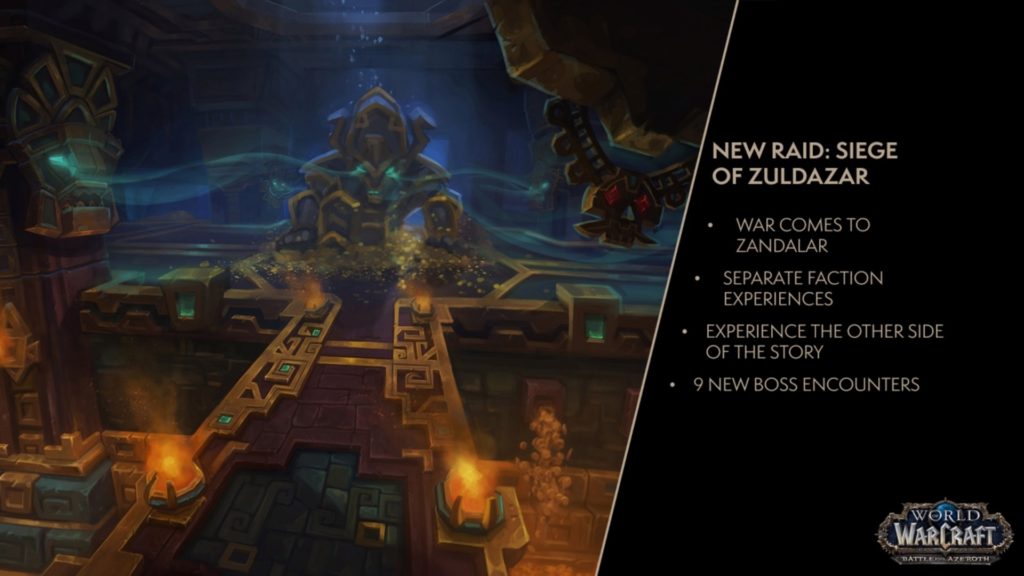