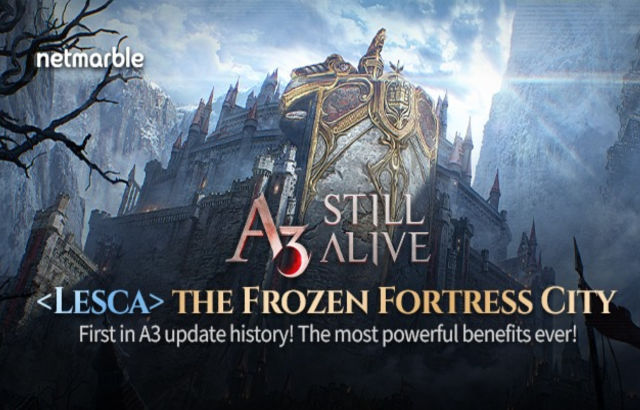 Netmarble introduces Fortress Battles for its dark fantasy open world mobile RPG A3: STILL ALIVE  – a new “Server-integrated Guild Battle’ mode which starts every Saturday beginning August 28th, and can involve three 50-player guilds for a maximum of 150 players per skirmish. The mode involves two guilds attacking the fortress, with one guild defending themselves from an invasion of enemy players. Learn more via an all-new trailer found here: https://youtu.be/0jdW2eb6B3c

Players can ready themselves for this new content with the Weapon/Equipment Mythical Awakening system, where Legendary-Set Equipment over Level 180 can be upgraded to Mythical-Set equipment. Completing the entire set will unlock all-new set substats.

A new personal Event dungeon – Rat Thief Nest – is also available to experience from Aug. 19 – Sept. 9. By defeating the rats and the final boss, Rat Thief Captain: Ratting, players can earn items used at the difficulty of their choosing including items used for awakening Soul Linkers up to the Mystic level.

Additionally through this update, the world of A3: STILL ALIVE is now open for even more warriors to become the strongest in the land, as the company announced the beta-service will be available for download for Windows PC via A3: STILL ALIVE’s website on August 26th and available now free-to-play on the App Store for iMac.

A3: STILL ALIVE has officially expanded beyond mobile devices with the game’s cross-play compatible beta-service for Windows PC and Apple iMac / Macbook releases, allowing mobile players to freely play the game on the platform of their choice. The Windows PC version can be downloaded directly from the official game website, while Apple iMacs and MacBooks equipped with an M1 Chip can download the game directly from the App Store. The new platforms’ added capabilities include key mapping, shortcut keys, and full-screen resolution improvements to enhance the user experience.

Other new content coming to A3: STILL ALIVE includes:

Set in an apocalyptic fantasy world of swords and sorcery, A3: STILL ALIVE is a cross-genre mobile experience that pairs the enormous and living worlds of Open-World RPGs with the extreme combat of Battle Royale. Players must be vigilant in an always-open Player vs.
Player (PvP) environment as they fight against enemies with intense hack & slash combat and prove their mettle in a variety of PvP and Player vs. Environment (PvE) modes. A3: STILL ALIVE is beautifully rendered with splendid console-quality 3D graphics that are brought to life thanks to the outstanding optimization of the Unity Engine.