Age of Conan's Saga of Zath Server Ends May 15: Here's Everything You Need To Know

Age of Conan’s Saga of Zath Server Ends May 15: Here’s Everything You Need To Know 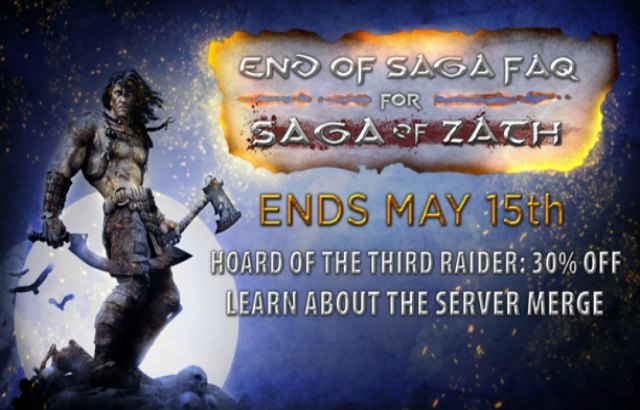 Age of Conan’s Saga of Zath Server Ends May 15: Here’s Everything You Need To Know

All good things eventually comes to an end, and AoC’s Saga of Zath server is ending this month. On May 15th, players will have to say goodbye to the progression server that have been popular with both new and former players. So what will happen to your character and achievements once the server goes down? Here’s everything you need to know.

#1 Saga of Zath will merge with Crom

On the 15th of May when the server goes down, it will be merged with the existing live Crom server. That means your Saga character will be transferred to Crom. This includes Saga quest rewards, titles and guilds that you are in. However, keep in mind that items that are still on the Tradepost or in the Mail will be gone forever, so sort that out soon.

For everyone that plays on the Saga server with a character above level 20, you will receive a free character slot on Crom. This ensures that you can immediately continue playing your saga character. Unfortunately, for players below level 20, your character will still transfer, but will be locked if you have no slots. The good news is, you still get rewards for being level 20 and below, like the Embrace of Zath cloak cosmetic reward.

Character names will be transferred from Saga of Zath. If there is a naming conflict, it will be resolved according to the following, in order:

Characters who lose their name will be provided a temporary name and you will be able to rename them for free the next time you log in with that character.