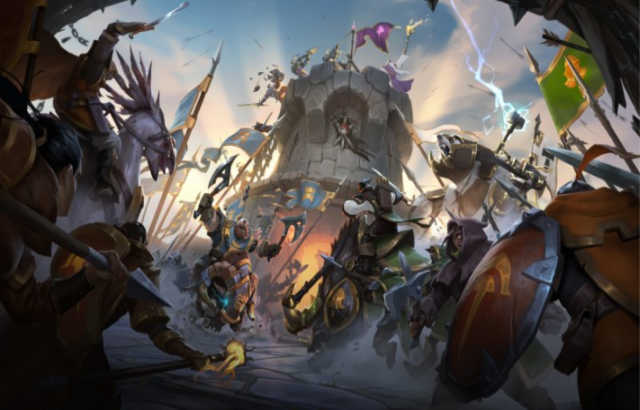 Sandbox MMORPG Albion Online is set to launch its next major update, Call to Arms, on March 17th. The centerpiece of this massive content update is a complete rework of Faction Warfare, which has been expanded, improved, and streamlined. The new system allows Factions to take not just Outposts but entire regions as well, and rewards loyalty to a chosen Faction via updated Faction ranks and month-long Faction Campaigns with valuable rewards.

Caerleon joins the fight as a fully playable sixth Faction with a unique “lawless” playstyle, as well as its own trade missions, a new City Heart and crest, and a powerful new mount: the Caerleon Greywolf. Alongside the six regular Faction Mounts, each city now has its own Elite Faction Mount that offers powerful combat skills as well as a unique Faction ability that can only be used while flagged. To allow more space for Albion’s growing population, the Royal Continent has been greatly expanded with numerous new regions. And to top it all off, a recurring Bandit Invasion event in the red zones offers thrilling large-scale combat for members of all Factions.

Call to Arms also brings major upgrades to Hellgates, introducing ten all-new Hellgate layouts and new demonic foes for varied and engaging PvE. Hellgate PvP takes on new dimensions as well, with the ability to chain Hellgates after a win and a rising lava mechanic that ensures a final showdown. And last but not least, new 10v10 Hellgates offer thrilling, high-stakes group PvP for new and veteran players alike.

Call to Arms also brings major quality-of life improvements. Loadouts allow players to create pre-selected builds to quick-equip from storage. Loadouts can be easily shared with friends and guildmates, and used by guilds to easily recruit for specific combat roles. Ability tooltips have been improved with optimized descriptions and color-coded text for easy readability. Animated vegetation brings new visual life to Albion’s biomes. And finally, numerous additional improvements, fixes, balance changes, and optimizations have been implemented to make the world of Albion better than ever.