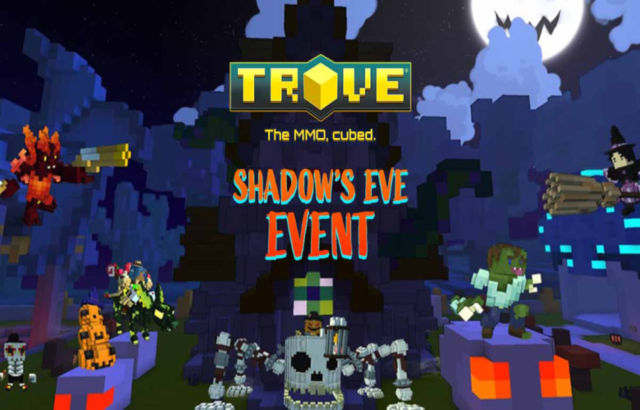 Trove’s Shadow’s Eve event features a number of new quests, including an 11-part adventure where players help new allies – the Order of the Moon – fight off the werewolf curse of Quberus. Completing the quest, as well as daily side quests, will earn players the Order of the Moon’s Treasure Box which can contain several rare items including new Lunar Lancer and Shadow Hunter costumes, Quberus and Wolf Hunter, new allies (Q’ido and Q’pot) and a new mount (G.O.P.H.E.R.). A new Delve Biome (The Wolves’ Den), new enemies to combat in Desert Frontier, Medieval Highlands, and Cursed Vale, and new vendors looking to sell this and previous years’ loot boxes make this an event Trove players are not going to want to miss.

Returning Trove players will be happy to know several fan favorites are coming back. Players can once again craft throwable Explosive Pumpkins and edible Tasty Candy Corn in preparation for their return to the pumpkin dungeons. There is a slight difference in this year’s pumpkin dungeons though in the form of a new boss to fight. Defeating the boss will reward players with a new ally.

Players looking to join the Shadow’s Eve event will need to have completed the Hubdate questline given by Qubesly. Once it’s completed, the initial quest to start Shadow’s Eve will be available in the “Events” category.

Trove’s Shadow’s Eve event begins today and ends on November 2nd, 2021. Those looking to relive its spooky aesthetics will be happy to know the Wolves’ Den biome will be added to the general pool of delve Biomes.