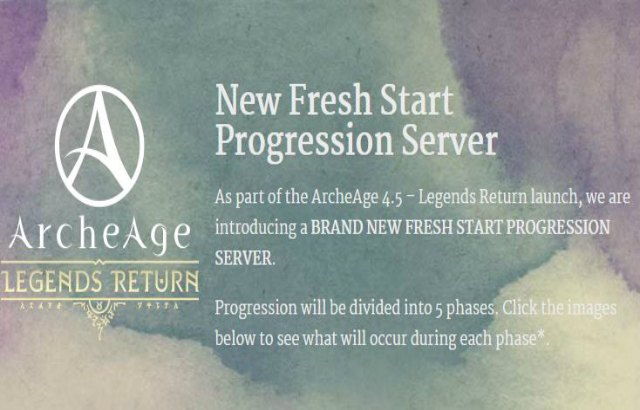 ArcheAge: Legends Return introduces two new progression servers, Nui and Ezi, for North America and Europe respectively. Nui and Ezi will offer time-locked content for the first time in ArcheAge, starting with low caps and systems from the game’s original launch and developing major systems, like Castle Sieges and Hero Elections, over time.

Marketplace restrictions will be in place to ensure that as the servers open, players will be placed on even footing through marketplace and gear progress restrictions that will be set over several months, allowing for all players to have the chance to reach the level cap prior to it increasing.

A breakdown of the Fresh Start progression calendar can be found here: https://www.archeagegame.com/legendsreturn , and will be updated as new phases are announced.

Dragon Mounts are also another major feature of ArcheAge: Legends Return, allowing players to raise dragons and use them as battle mounts. Working with Daru trainers to gain items necessary for the dragon raising mechanic, players can summon black, red, and green dragons, even outfitting them in armor to improve their stats.

Also introduced in ArcheAge: Legends Return are Shadow Invasions, new rift events that occur when a major world boss dies. The Shadow itself will lash out for revenge, requiring players to work together to defeat the new threat, earning themselves rewards like rare materials and Gilda Stars in the process.

Even more improvements to come to ArcheAge in the new update, from destruction removal on crafted items to a Battle Balance update that will evolve the game’s meta with a major skillset overhaul.