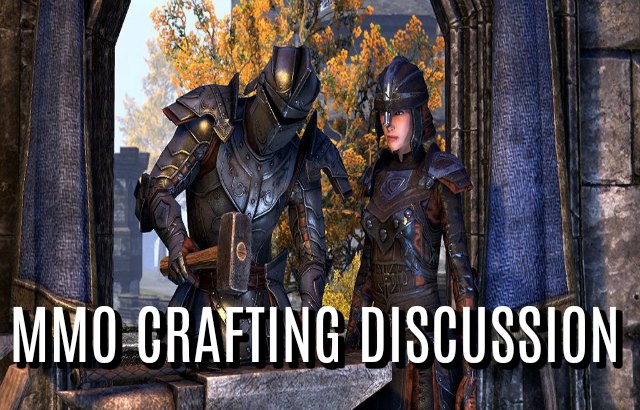 In a recent conversation with a fellow MMO player, we talked about the importance of crafting in MMORPGs. Crafting is a quintessential MMO activity that’s been an inclusion in every game since the genre took off. It’s another effort, or time or money or grind sink that progresses a player’s character in the game. Most MMORPGs allows crafters – individuals and solo players included – to make decent gear that lets them enjoy the content. Moreover, it allows them to be self sufficient, and to make some money as a merchant if they choose to sell what they craft on the auction house.

But in recent times and with the exception of a few sandbox games, crafting always plays second fiddle to gear drops. It’s almost unheard of to find a game that let’s you create something better than what drops from difficult raids and endgame PvE. So my question to you is, would you like to see that changed? Should crafted gear gain the same amount of importance as endgame raid drops?

Is The Future About Minimal Crafting?

I’ve played MMOs where its crafting system is incredibly complex. For example, to create a weapon requires mastery in a previous tier, on top of having sub components for every material in order to craft. On top of that, you need external items to improve your critical craft chance to make a superior item. And on top of that, you’ll need to refine your materials before you can use them. Yes, this all seems normal because it’s what we’ve known for a long time.

What if the future MMOs didn’t have to stick to this norm? A simplistic crafting system will de-clutter inventories and bank spaces, but it should maintain it’s level of involvement so it feels that the player is indeed progressing their gear and ultimately their character. Which MMO already does this? Well, I’ve recently finished my review time in Secret World Legends, and that game almost feels like it doesn’t have crafting. It uses an upgrade system, where you only get gear drops and those can be used to upgrade and fuse your existing gear instead of being vendor trash. It’s pretty refreshing, as you upgrade in the world as you go, keeping your inventories clean. But can it work in AAA fantasy theme park MMOs? What do you think?

Should It Let Players Craft Better Gear Than Raid Drops?

This is a pretty controversial question. I’m sure endgamers don’t want to see crafters make gear that’s as good or better than what drops in raids. If endgame gear can be easily crafted, then what’s the point of running endgame or having endgame content in an MMO, if not to get the best gear? Solos and casuals will no doubt love to have the option to not join endgame and be able to craft the best stuff with minimal effort. Is it possible to find a balance?

Some MMOs out there like Guild Wars 2 tries to make the best of both. The best endgame gear must be crafted, and the rarest materials drop from endgame. That forces players to run the endgame content, and for those who don’t, they can simply buy the rare materials from the auction house to craft. It’s not perfectly balanced, but it’s a nice way to let everyone achieve the same end goal in their preferred way. Now that I’ve painted the picture, I’d like to hear from you.