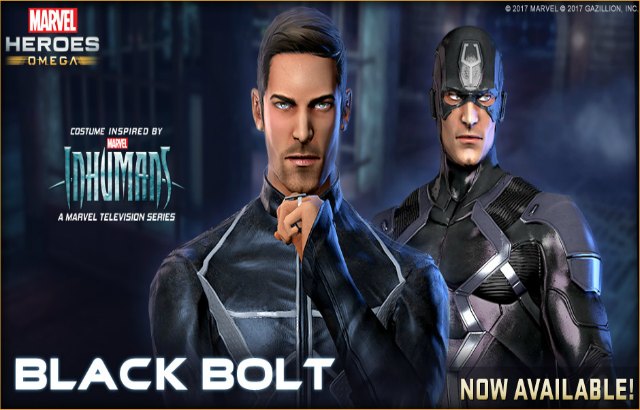 In conjunction with the release of Marvel’s Inhumans TV show, Marvel Heroes are releasing a brand new hero. Black Bolt becomes the latest playable Marvel Hero, and is a part of the Inhumans universe.

Gazillion Entertainment has said that the playable version of Black Bolt will arrive to cause mayhem in Marvel Heroes Omega. While there isn’t a release date anywhere, we expect Black Bolt to arrive fairly soon for both the PC and PS4.

Anyone who’s ever said, “Words can never hurt me,” has never met Black Bolt, and his Ultimate ability demonstrates this with tremendously destructive results. “His Ultimate is called ‘Royal Decree,’ and it’s quite a thing to behold,” says Gilbert. “Black Bolt unleashes the full potential of his voice in a reality-rending yell that instantly vaporizes non-boss enemies and decimates everything else. Black Bolt is a unique blend of a ranged energy blaster and a mobile scrapper—with spectacular visuals fit for a king!”
The Inhumans TV show did not get off to a great start with audiences, but at least in other forms of media, it still works. In addition, more heroes introduced into the game could sway players in favor of the Inhumans. For more information, check out the official website here.
0 Share
Share Tweet
Topics: Marvel Heroes MMO MMORPG