Blood Rites 2019 MMO Review: A Classic Out Of Time

Blood Rites 2019 MMO Review: A Classic Out Of Time 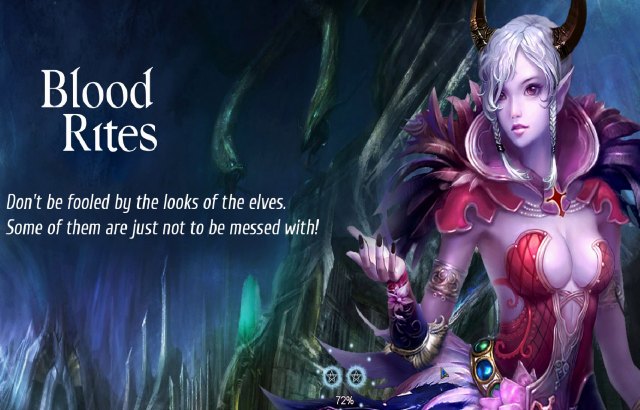 If you have not heard of Blood Rites, you’re practically blameless. Blood Rites is like a photo frame from the 90s that you store somewhere in a box up in the attic. This Asian fantasy MMORPG first released in 2011, and have somehow survived until today. It’s a free to play game that’s also a classic in many ways – not that it’s of excellent quality, but rather due to its age. Having played on a brand new server that current publishers GameNet released recently in 2019, here’s some thoughts about Blood Rites.

Character creation is basic, and you are told you can pick four classes much later on. These are of the typical archetypes – warrior, mage, archer and a tanky type. Fair enough. The game then vaults you into the opening series of quests without so much as a sniff of world building. Where are we? Who are we? Yes there were races to pick from with snippets of background. But who’s the big baddie we’re up against. Why am I here? None of these basic questions are relayed in the early parts of the game which renders the whole thing soulless. No matter, gameplay basics are next. Players control their characters by mouse clicks or WASD, and combat is traditional with tab target mechanics. You do get a chunky hotbar though, which will be filled up with skills as you progress. Everything else from movement quest hub crawls in the first hour is forgettable. The pace of the game doesn’t feel very welcoming in 2019, and it’s clear the developers have made no intention to revisit these early parts to enhance the new player experience. 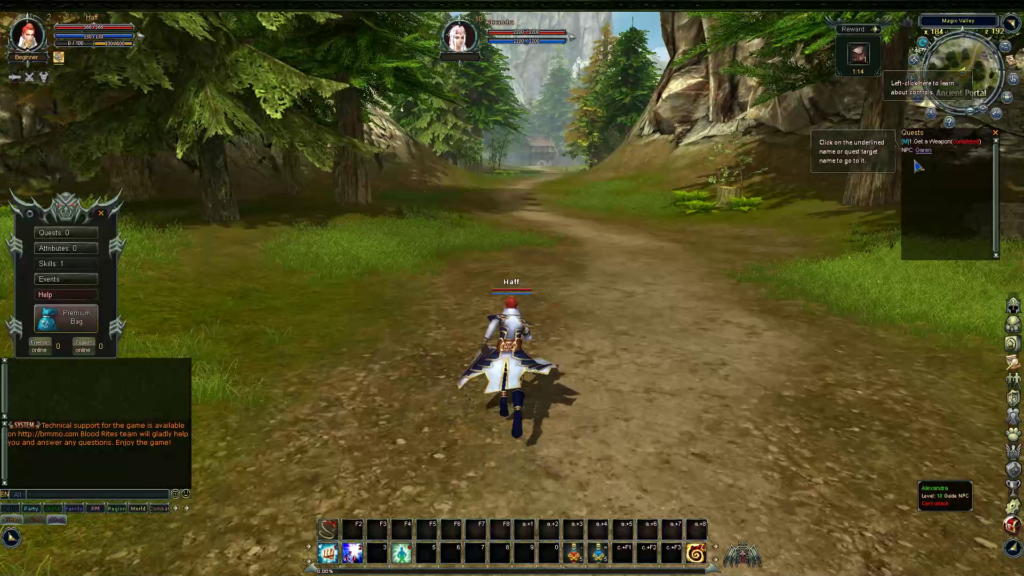 So we’ve established that you’re classless until you specialize later on. You still earn experience points and level normally. Each time you level, you do get a handful of skill points that you can spend in skill trees. Here’s the interesting part – skill trees are unlocked based on which weapon you’ve got equipped, that follows the four classes in essences. You have swords, staffs, bows and more. That’s a rather fun way to build your character, and spending points in trees grants you more active abilities and passive stats. As for combat itself, you’ll be pleased to know there isn’t a global cooldown or GCD. Each skill has its own CD, and the animations are not as bad as the game’s age may have you believe. Where it all falls apart however, is the game’s questing design. It’s tedious, repetitive and clearly designed for MMO dummies. “We are now going to do a fetch quest, this involves no combat. Please pick up 3 flowers…”. And this is no joke, that is an actual early game quest dialogue. The tone of questing for both side quests and main quest doesn’t change until your early 30s, but by the time you get there your willpower to carry on might be depleted. The good news is, the new server Blood Rites opened grants all players a 50% boost to experience gain, so leveling will be quick. 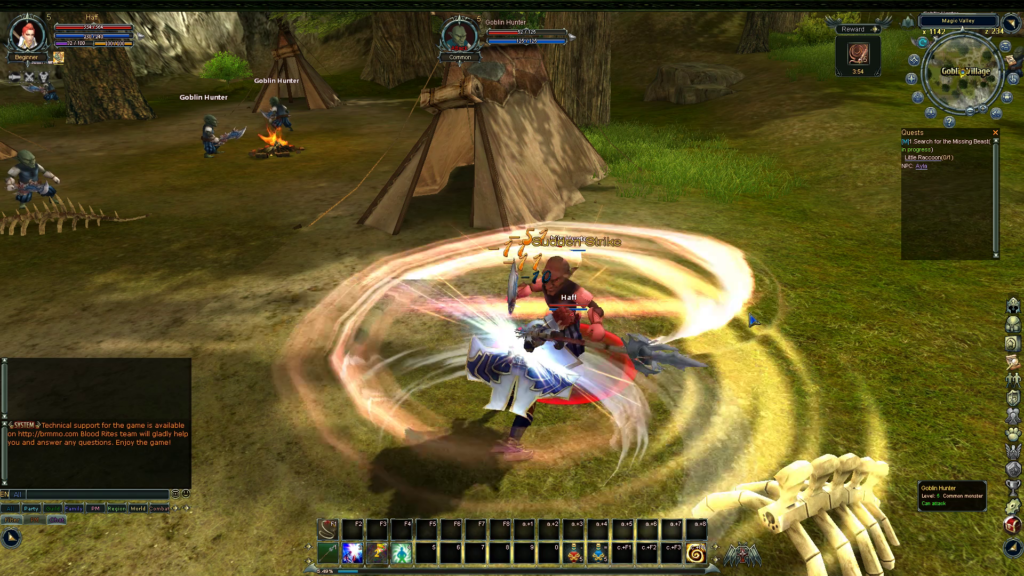 The Best and Worst Parts

The one good portion of the game casual MMORPG players might enjoy is probably the group content. There’s dungeons and raids aplenty, filled with trash monsters and boss fights that has rather interesting mechanics. They take a while to get to but due to the tolerable combat, it’s more likely you’ll favor this over the horrible questing for levels. The loot isn’t half bad either, and it’s a good way to stock up currency and gear for later adventures. The worst part of the game unfortunately, is obvious. No it’s not questing, it’s the cash store. Blood Rites operates on a simple rule – you rent things, not purchase them permanently. Everything from mounts to pets are on a timer, regardless of how you obtained them. For example, that shiny bird mount and racoon pet they give you before level 10 expires after 30 days. Then, you can head to the store to pick up new ones for another month. Due to the speed of mounts and usefulness of pets, most players will feel like they don’t have a choice but to open their wallets and purses. Without mounts, running speed is a joke. Pets have abilities that auto picks up loot, saving you precious few seconds. The worst is still yet to come – you can buy high tier gear with good stats in the store. What does this mean for the game’s PvP content with arenas, tournaments and GvG all in the mix? Honestly, don’t bother if you’re not willing to shell out some cash. Somewhere in between is an odd companion system called Elf Companions. This lets you grow a companion that offers benefits to your combat attributes. While interesting, it’s also grindy as hell to get it up to a point where it actually makes a difference. 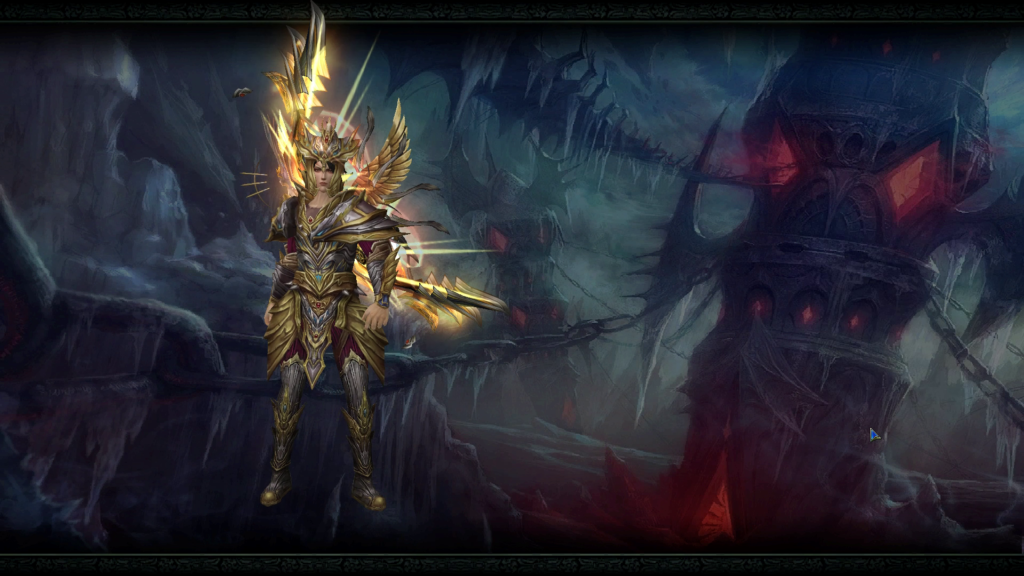 Is Blood Rites Worth Playing?

No. Free to play games live and die by their leniency toward players who can’t afford a subscription or a one time payment. They also must balance it out between the fun factor of its content, progression and community. Blood Rites is fully free to play, but reduces the quality of life so much that it’s frankly not worth the effort. There are much better F2P MMORPG options out there, that offers more enjoyment all departments. This game is old, and that does affect its quality a lot. Graphics and environments are painful to look at. The questing was designed for last decade, and the list can go on and on.