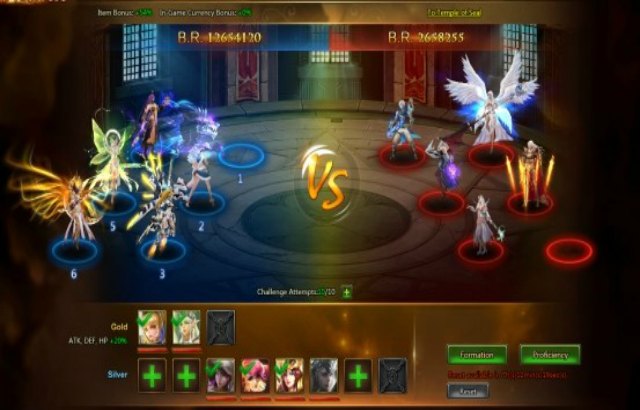 League of Angels II has just launched its latest PvE update featuring a new mode, the Temple of Seal. The new mode will be the perfect way to gear up your companion heroes to challenge more content.

In Temple of Seal, Players at Level 60 or above will be able to engage in brand new PvE battles. Players could select their Artifact, Mythic and Legendary Heroes to challenge 15 PvE stages for great rewards. All the Heroes in Temple of Seal have specific initial attributes based on their quality.
There are two categories of slots, Gold and Silver, each of which has 3 and 8 hero slots. Only artifact heroes can be put into the Gold category and those Artifact heroes will increase extra attribute bonus by 20%, on their ATK, DEF, and HP. The slots under Silver category are open to all Artifact, Mythic, and Legendary heroes. Different qualities will bring different item bonuses. The higher the quality, the higher the item bonus rate.
When heroes were deployed, players can start to challenge the stages. There will be 10 free attempts for each stage. Clearing a stage will grant player awesome rewards such as Proficiency, Seal Voucher, Seal Core, Seal Stone, Seal Shard, and Skill Points. First clearance of certain stages will grant players extra rewards – Skill Points and Seal Shard. Skill Points can be used in the “Proficiency” interface. Players can use Skill Points to learn more skills for more attribute bonus or item bonus, the bonus will only take effect during the battles in Temple of Seal.

For more information, check out the site here.