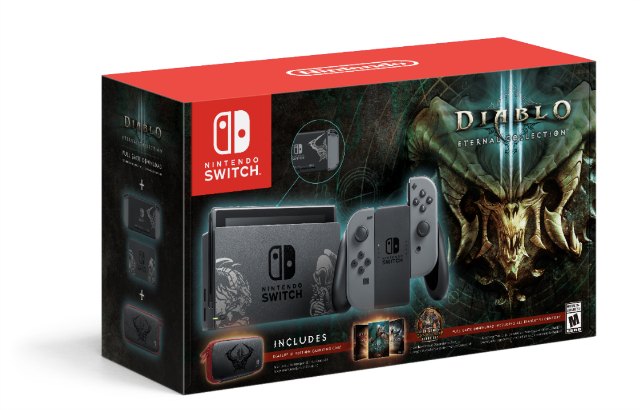 The Eternal Collection includes every feature, refinement, and upgrade added to Diablo III to date, including the critically acclaimed Reaper of Souls® expansion, and last year’s Rise of the Necromancer™ pack, as  as platform-exclusive bonus items such as a cosmetic armor set inspired by Ganondorf, the iconic villain from The Legend of Zelda series. With a five-act story campaign that spans the deadly world of Sanctuary, an endlessly playable Adventure Mode, and seven powerful classes to master, Diablo III Eternal Collection is the perfect all-in-one package for novice demon-slayers, and veterans eager to cleanse Sanctuary on the go.
‘The Eternal Collection delivers everything Diablo III has to offer to Nintendo Switch players, and the great conflict between the High Heavens and the Burning Hells is now in their hands,’ said J. Allen Brack, President of Blizzard Entertainment. ‘We look forward to sharing all of the challenges, adventures, and sweet, sweet loot with our newest allies in Sanctuary.’

Players looking to commemorate the arrival of the Lord of Terror to Nintendo’s newest system also have the option of purchasing the Nintendo Switch Diablo III Eternal Collection Bundle—forged specifically for Sanctuary’s newest heroes and styled to evoke the dark visage of the Lord of Terror. Available starting today, the bundle includes a Diablo III-themed Nintendo Switch system and dock, a Diablo III-edition carrying case, and a download code for Diablo III Eternal Collection.

Heroes hoping for an edge in their crusades will want to take advantage of Diablo III Eternal Collection’s amiibo™ support—and seize a Treasure Goblin amiibo, available in December. Scanning the Treasure Goblin amiibo opens a portal to Greed’s Domain, the mythical Treasure Realm replete with riches and guarded by the Baroness herself. In addition, players can scan any available amiibo figure once per day to spawn packs of powerful Champion monsters to battle for experience and loot.