Skyforge Fifth Anniversary Expansion Out Now: Here Are The Features 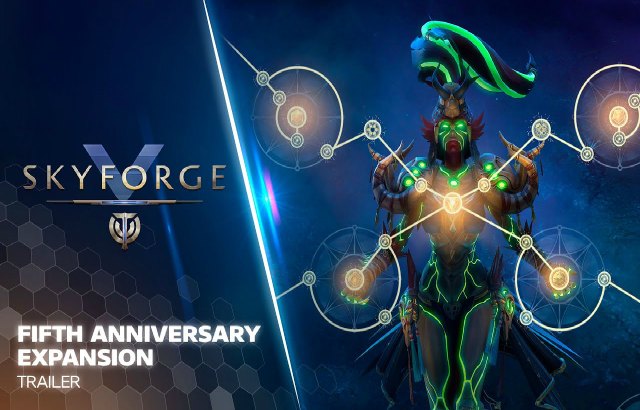 Global publisher MY.GAMES is proud to release the Fifth Anniversary expansion for its popular sci-fi-MMO Skyforge! Celebrations are in order and players are treated with a massive content update introducing festive events as well as new content and features to thank all players. A new divine form, new progression systems and celebratory anniversary costumes await players to commemorate five years of Skyforge in the brand-new Fifth Anniversary expansion on PC, PlayStation 4, and Xbox One.

Aelion Day commemorates the bonds that unites its players, which pays tribute to the Immortals who protect Aelion from invasion on a regular basis. Festivities are in full swing, and players can try their hand at a range of new missions to earn five special anniversary costumes.

The Phytonides are pollinating the planet with evil in a new Invasion, and it’s up to the players to put a stop to their schemes! Defeat the Phytonides and the Avatar Machavann to earn up to 20 levels of exclusive rewards through the Invasion Pass, including a brand-new Divine Form.

The divine warrior Wakan is a powerful entity whose eternal gaze has studied Aelion for millennia. They have finally deemed Aelion worthy of their power, and can be unlocked by reaching level 16 on the Phytonide Invasion Pass!

Players can benefit from amazing perks during Invasions by charting a course through the Invasion Atlas!  This star map offers the chance to maximise damage, increase class efficiency or grant other beneficial effects. There are many ways to progress, and every Invasion offers a chance to take a different, unique path.

Discover a trio of new golden Legendary Weapons to arm the Necromancer, Gunner, and Slayer classes with. Their luxuriously decadent finish is worthy of Aelion’s current celebrations.

Another good way which takes a little longer is to complete Public Execution activities in hyena controlled areas. The rescued civilians will drop Hyena bounties which also count toward your league progress.

The Nightmare difficulty already challenges players by cranking up the adversity during adventures. Maledictions are new difficulty modifiers leading to new rewards that will affect certain aspects of gameplay. Some make players more vulnerable to damage or limit the use of their Divine Form.

Celebrate five years of Skyforge with the Fifth Anniversary expansion, now available as a free update for PC. The update will be released for PlayStation 4 and Xbox One on April 9th.