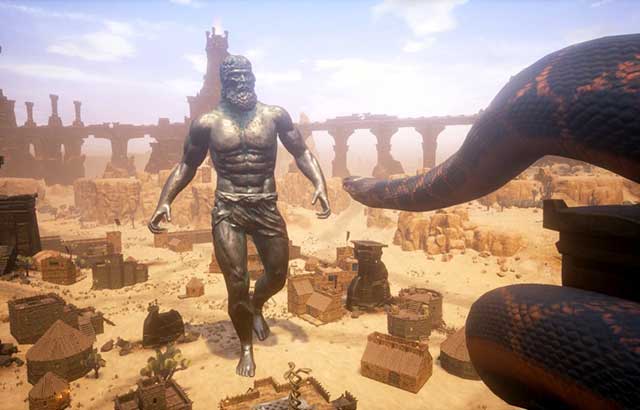 Funcom has released quite a bit of detail about their new MMORPG Conan Exiles and this time, the team is focusing on building the lore. The latest developer blog post details the religion of the world and how this affects the player.

At the start of the game, players are able to build an altar to their god. Altars are used to craft religious artifacts and used to access recipes. There are three main ways to gain favor with the players god. Each god seems to have a preference from the available sacrifices.

There are four main gods in the game for the player to select from.

This god values justice above everything else and is the chosen god of the Hyborians. The followers of Mitra have the ability to create religious clothing, statues and weapons.

Followers of Set honor it with human sacrifices on top of its bloody altars. This god grants players the ability to change snakes into arrows while also giving them immunity to poison.

Yog is the harshest god and demands that players consume the flesh of other humans. Doing this grants players withe bonuses for their armor and weapons.

This god does not answer  prayers or religious acts. This god has been designed for players who don’t want to get involved with the regligious systems.

How to summon gods on Conan Exiles

The god can take a physical form called an “avatar” which can be summoned by players. While it’s possible to summon them, doing so is very difficult.

Players need a level three altar and must have captured a high priest for that religion. Summoning the avatar will take quite some time and players are vulnerable to attack while they attempt it. Players will have direct control over the avatar but will need to take care of their mortal body while in this form.

The full details are available on the official developer blog post here.