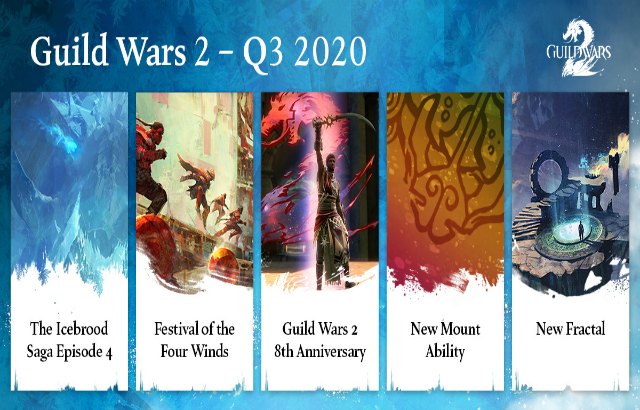 Summertime in Guild Wars 2 and Tyria is underway, and the game is currently celebrating the Dragon Bash festival in-game. That’s not slowing ArenaNet down however, and they have announced a host of new content coming our way for the rest of the summer.

Starting with the best news, ArenaNet has confirmed that we will be getting the next installment of the Icebrood Saga, a new episode coming later in July. No Quarter was released without voice acting unfortunately due to Covid 19, and it looks like this new one will be the same. Anyhow, expect to see the story continue, with more icy threats for the Commander and gang to deal with.

Festival of the Four Winds

Festival of the Four Winds is planned for the first half of August. Kick back and relax in the beautiful Labyrinthine Cliffs if you need to cool down—or heat things up with battles in the Crown Pavilion. No matter what you choose to do on your summer vacation, the festival will feature traditional activities, annual achievements, and new rewards.

It’s nearly time to celebrate the eighth anniversary of Guild Wars 2‘s release! Every character receives an annual present on their birthday—the day they were created—packed with valuable and unique items. The oldest Guild Wars 2 characters were created during the launch’s early access period in 2012, and they will begin receiving their eighth birthday gifts on August 25.

Dust off your best mountain-climbing boots for a journey to beautiful and treacherous heights. A new fractal is on the way in September—keep an eye out for more information as the release date draws closer!

And to wrap it up, Guild Wars 2 will be introducing a new mount ability for one of our mounts. Now the studio is being very secretive about this until the trailer drops sometime this week, but we suspect its the water mount based on the graphic that’s on the summer roadmap picture.