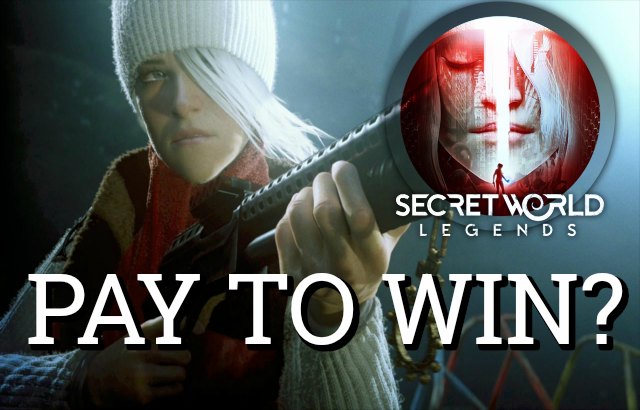 Funcom’s Secret World Legends is finally up and running. The game has been welcoming new free players since Monday the 26th, and plenty has changed. The fact that there isn’t a buying entry into this urban fantasy shared RPG world is perhaps the biggest. Everyone can now pick a side – Illuminati, Templar or Dragon – and uncover the mysteries the game offers.

While the changes to the combat system in the form of the reticule is being praised, other aspects of the game are raising eyebrows. In particular, the game’s free to play monetization systems that allow players to purchase advancement. To clarify, with real money, players can buy goodies should they want to. This raises the question: is Secret World Legends then pay to win? Let’s explore further.

To understand where these claims come from, we have to look at what the game offers players who spend money. There are no ordinary loot drops in the game. Loot items such as gear and weapons come from mission reward bags, or through an RNG dungeon chest roll. Landscape mobs can drop an Agarthian Cache however. These are SWL’s version of the cash shop lock box. Players will need a Cache Key to open them, and they cost Aurum, which costs real money. Aurum can also be bought using Marks of Favor – the in-game currency – via the Exchange.

Patrons or subscribers, do get one Cache Key daily. So what’s in these Caches? The best items should you get lucky, are the Anima Touched Weapons. These are powerful Epic Tier weapons, third best in the game. However, even if you do get one, you’ll need to manually labor to invest the crazy amount of Distillates required to level it up. Perhaps the best pro for getting one that you won’t use is selling them on the Auction House for a good sum of MoF.

The game’s premium currency is the Aurum. These are used for almost everything, especially unlocks that you’ll be familiar with free to play MMOs. More guild bank space being one of them, for example. As you progress further, you’ll find that Aurum can be used for a variety of interesting things. You could for instance, upgrade weapons and talismans to higher tiers through imbuement. This will cost you around 19.99 Euros or more. While you can get Aurum without shelling out real money, the Exchange is largely dictated by supply and demand.

It’s also important to note that there isn’t a fancy in-game store anymore. Now, there’s just a green plus sign with a simple UI to buy Aurum. What a difference from The Secret World. The cheapest Aurum package is 500 for 4.99 Euros. At the other end, 99.99 Euros buys you 12,000 Aurum. That’s a lot of money for in-game premium currency. Then again, you can do a lot more with it then just upgrade weapons and gear. See below.

If you follow The Secret World, you’ll know what Action Points and Skill Points do. These are points gained from earning experience through playing the game. Players can use these to buy active and passive skills for their weapons. What’s different in Secret World Legends is that you can now purchase minor stat bonuses on the passive skill pages as well. These will eventually add up, regardless of which weapons you purchased them for.

Because of how progression works now, you’ll need to unlock all skills earlier in the tree in order to get the ones in the middle or end. And some of the beefier stats lie exactly there. So now that you can again, buy AP/SP using Aurum, this further fuels the pay to win argument. That is, a player who buys all their weapon skills will be more effective faster than the average player in PvE and PvP.

Is the P2W chants justified? It really depends on what you want to achieve in Secret World Legends. Long-time players and fans of the game will know why the relaunch was needed. This is a primarily story-driven MMO and for the story to continue into Season 2 beyond Tokyo, a relaunch and more money was needed. And through this new model and monetization systems, Funcom might have a chance of keeping the IP alive for a while.

When one looks at what the current trends are for F2P MMOs, they’ll see that there are many similarities. Paying a premium to progress faster will always leave a sour taste in the mouth for those who don’t like the idea. But in a story heavy MMO, will that hurt? As mentioned, players always had the option to buy AP/SP Injections in The Secret World. Now that it’s back in SWL, why the extra pitch forks? As for buying your way through the weapon skill pages, that will probably rub people the wrong way, especially PvPers. PvP and the solitary Shambala map will feel impossible when you’re up against players with fully decked out Anima weapons and stats. To soften the blow, losers still get PvP reward bags, but I feel that the current monetization system will hurt PvPers the most, because there’s nothing to win in PvE, except if you’re hunting ‘World First’ achievements.

There will continue to be MMO purists and Funcom naysayers that will have their arms up in the air about this for months to come. They will  be calling for a rework of the monetization systems again. Most would prefer to see the game make money through a full subscription model or buy to play. Well, they tried that, remember?