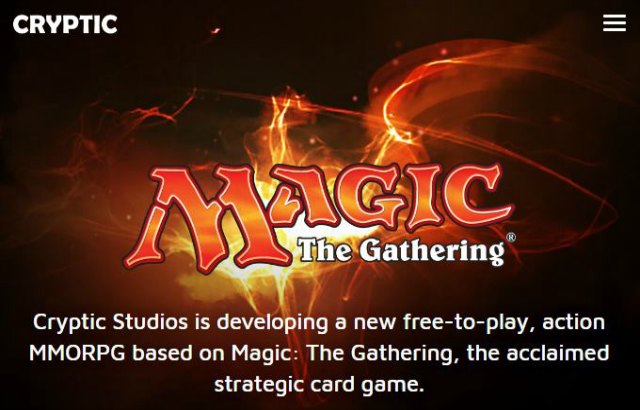 Yes you read that right, a Magic The Gathering MMORPG. It’s impossible to believe, but we have evidence right here. Cryptic Studios, Perfect World and Wizards of the Coast have all but confirmed that an MMORPG is in the works.

The game will be based on the MTG card game universe. According to the site, the MMORPG will be completely free to play and strategic.

“Experience stunning visuals and sound as we bring Magic to life in this next generation MMORPG. As a Planeswalker, you explore amazing worlds, combat powerful creatures, and meet the legendary beings that shape the fate of the multiverse.”

The studios are branding it a AAA MMO, which is also big news. The game will be available for both console players and PC players. While there isn’t much details about how it plays, the fact that it’s an MMORPG is a pretty big giveaway.

On the site, it does say that the game will use the action MMO approach. Therefore, expect to see full 3D combat, open worlds and interesting creature designs from the card game. It’s hard not to be excited about this piece of news – I’ve been an MTG card player for over ten years.

MTG is undoubtedly the biggest table top card game in the world, so to see that it’s getting and MMORPG iteration is fantastic. What do you think?