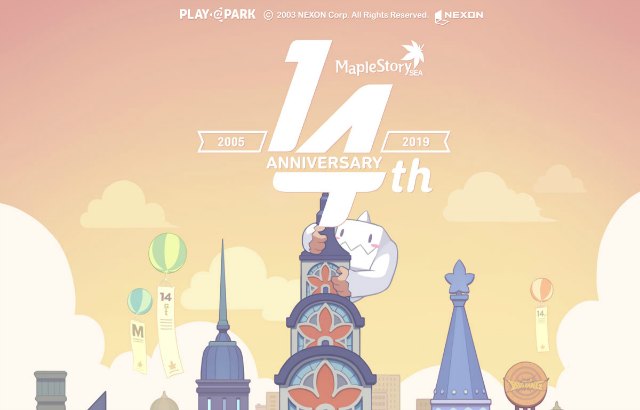 Since launching in 2005, MapleStorySEA has played a significant role in many a youth’s childhood. Years later and the game show no signs of slowing. Now, after more than a decade of service, MapleStorySEA prepares to celebrate its 14th anniversary. Existing, returning and even new players will have a slew of nostalgic in-game activities to partake and exclusive rewards to enjoy.

Beginning April 3rd and bundled under the 14th Street moniker, players will be able to participate in 19 unique in-game events (named after major patches like Big Bang, ARK & V) to earn exciting rewards such as new chairs, mounts and the 14th Street title. This title, which players acquire at the start of the patch will see its reputation and stats increase as more missions are completed.

On April 13th, players will also be able to redeem special Thank You gifts, once per world. This includes items such as 150 Anniversary coins vouchers, Maple Trendy Coat vouchers and more. There are a total of 10 special anniversary items to claim.

Also, making its comeback this year is the adorable Pink Bean class. As a male warrior class, players can create one Pink Bean class in each world, per MapleID. The new class is only available for play during this patch cycle and will be removed once the patch ends. This year’s festivities also see Pink Bean equipped with two new skills; Pink Bean’s Scooter, which negates any damage taken during combat while riding it and God’s Twilight, which summons a statue from the Temple of Time to attack your enemies.

Separate from the patch but timed to launch around the same period is a revamped MapleStorySEA Passport page. The new site comes with a more fun and updated look, better login functionality and other enhancements. It will be accessible to beta testers on the 3rd of April for a final leg of bug fixing. The site is scheduled to go live sometime the week after pending no significant issues.

For a comprehensive list of the in-game activities coming with April 3rd’s 14thAnniversary patch, check out https://www.maplesea.com/