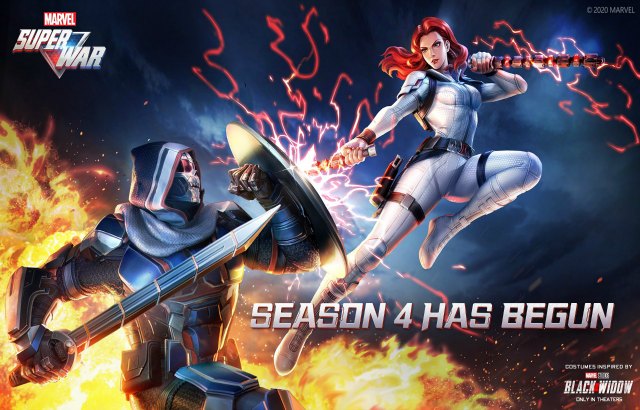 MARVEL Super War launched its highly anticipated Season 4 today! A series of limited time in-game events inspired by Marvel Studios’ Black Widow will be released! Additionally, Hela and War Machine don their Epic Skins from the brand-new “Opposite Realm” series, revealing their unprecedented reversal of Good & Evil! Finally, the powerful Mutant gifted with teleportation abilities and the master of Limbo — Magik will make her grand debut!

Starting from the Season 4 update, 6 weeks’ worth of themed events will be made available in MARVEL Super War. Players can enter the giveaway for bountiful rewards including special avatars and much more. In addition, the villain “Taskmaster” will join the battlefield. With the ability to replicate the combat movement of other Super Heroes instantly, Taskmaster will bring both chaos and excitement to the battlefield. Also available in the game will be Marvel Studios’ Black Widow inspired skins for Black Widow and Taskmaster. Marvel Studios’ Black Widow will be available only in Cinemas. Stay tuned!

Hela and War Machine will also receive entirely new costumes in the brand new original skin series “Opposite Realm”, where the Goddess of Death transforms into the Goddess of Justice, standing as a beacon of hope across the Ten Realms, and the patriotic War Machine now becomes the merciless Warbringer, bringing destruction and mayhem to the peaceful world. Keep an eye out for these two skins as they will be made available after the Season 4 update!

Finally, a new Hero will also be introduced during this season: Magik, a powerful sorceress and Mutant able to teleport across dimensions and can control the demonic forces of Limbo. She has followed in the steps of her brother Colossus to join the X-Men as well as lead her allies on the New Mutants team. Magik will be joining the Wakandan battlefield as a Fighter type Hero. Come and witness her new journey in MARVEL Super War!