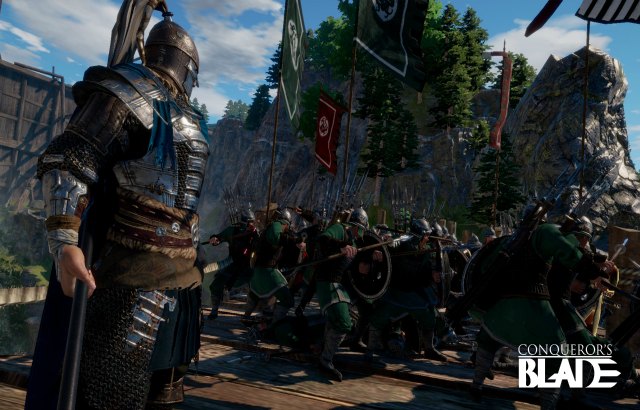 My.com is excited to invite players to join in on the medieval action of their free-to-play tactical MMO, Conqueror’s Blade. Players can now master the art of medieval warcraft, create their own unique warlord from 10 different classes and lead armies to war and conquest. Warlords can enter the fray of epic 15 vs. 15 siege battles choosing to employ special abilities, devastating weapons of war and cunning strategies to gain the advantage. Players can also ride out into a perilous, vast open world and conquer lands and resources in the name of their burgeoning empire. Beginning June 4, every player can register on cb.my.com and start their solitary conquest or join forces with other conqueror’s to reshape the vast open world into their unique empire.

Master the Battlefield: Unleash devastating weapons and massive armies in epic 15 vs. 15 online siege battles. Issue orders to your soldiers in real-time, using clever tactics and sheer force to overwhelm your enemy and claim victory.

Create Your Warlord: Customize your conqueror and specialize them in 10 powerful weapons classes, each with unique special abilities, combat styles, strengths and weaknesses. Mount up, draw your weapon, and command your army from the eye of the storm.

Open World Strategy: Spread your influence and power across the full extent of your vast new domain. Discover more of the world, gather resources and initiate trade to build and develop your castle, raise your army, and turn this land into your empire.

Founder’s pack owners get a head start that begins on May 28, in advance of the Open Beta. To play ahead of the curve, three packs with various bonuses are available as pre-orders. For more information, please read more here.