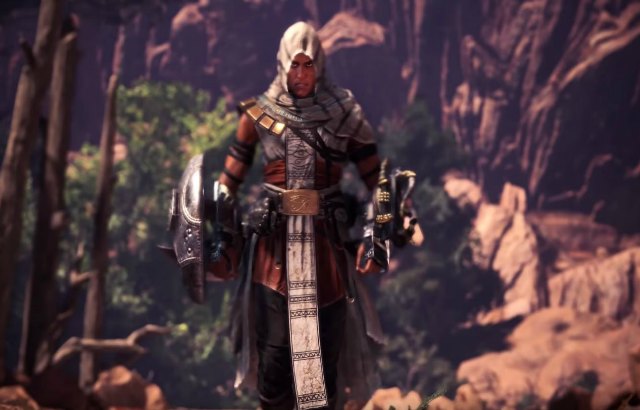 Monster Hunter: World players got a pleasant surprise today. Players looking to spice up their game with some Assassin’s Creed can now do so due to a special in-game collaboration between the two franchises.

There’s a new Assassin’s Creed Hood tool that is now available in the game. It also comes with the Bayek Layered Armor gear that can be equipped to give your characters that iconic AC look. This crossover event will be running until January 10th 2019 for both the PlayStation 4 and Xbox One. PC players unfortunately, will get this crossover event at a much later that.

Check out the collaboration event in the trailer below.

In Monster Hunter: World, players take on larger than life monsters in a variety of vast, living, breathing ecosystems either solo or with up to three other hunters via online co-op, complete with drop-in functionality, a first for the series. The story follows the journey of the elder dragons as they begin their once a decade migration across the sea to a land known as the New World in an event referred to by inhabitants as the Elder Crossing. As part of the Guild’s Research Commission, players must embark on a grand journey to this massive, mysterious land and uncover the secrets behind this phenomenon. The Monster Hunter World: Iceborne expansion will build upon this story when it releases in autumn 2019 for PlayStation®4 system and Xbox One. For all the title updates revealed today, including the Monster Hunter World: Iceborne expansion, Capcom is planning to develop PC versions as well, and will share more on the availability in future announcements.