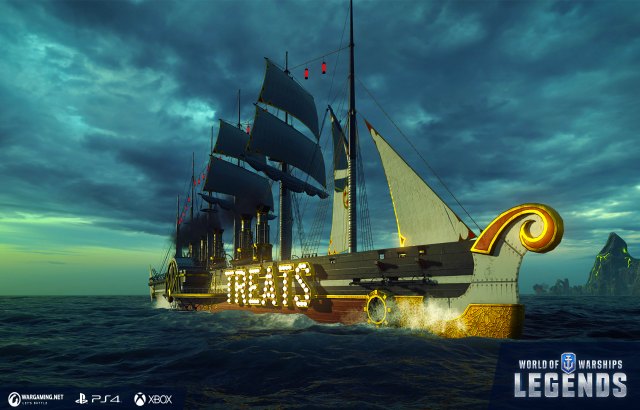 A massive update is arriving today for World of Warships: Legends, bringing a new campaign focused on a powerful new premium ship. Players will also see the full release of French Battleships, changes to the Commander system, and the upcoming Saving Transylvania operation.

Players can start on their way through the Hunt for Atago campaign to earn the heavy cruiser Atago. This ship is a premium Tier VII Japanese cruiser that seems to have an answer for everything: powerful guns, excellent torpedoes, enough speed and armor to get through any battle, and a repair party to boot. To earn the Atago, players will need Admiralty Backing which also quadruples the value of the rewards from the campaign. The Hunt for Atago campaign has been redesigned to provide better rewards, improving the progression experience.

The French Battleships are also fully released out of their early access phase. They are interesting beasts with some peculiar traits. For example, they often carry smaller weapons than their counterparts; however, they make up for their gun size in sheer shell output—the Tier VI Lyon carries an absurd Sixteen guns in signature quadruple-gun turrets! They are very adaptable battleships, applying speed and weaponry to good effect on the high seas.

Players will find it easier to get the commanders they need for their ships! Commander packs will always provide players with a new commander, unless they already have them all. This change will reduce the randomness of obtaining these admirals, making it easier to get the perfect captain for the new French Battleships. Commanders will also make their way into the store so players have the opportunity to purchase them with Commander Experience.

The first-ever PvE operation in World of Warships: Legends, Saving Transylvania, is rapidly approaching. The operation will start on October 26 th , when players will find three strange ships in their port: Jackal, Blade, and Igor. These ships will only be available for the operation, only to take on the Rasputin. Players will have to navigate through these treacherous waters while fighting off enemy Zikasa ships, catapults, and the dreaded Rasputin. Players will have to protect the Transylvania as they fight through this swarm of enemies. Once players manage to complete the operation there are hefty rewards waiting for them!

This update isn’t only about new campaigns and spooky operations, it comes with the first premium ship available entirely for Global Experience – the Alabama! This Tier VII American Battleship is a monster, able to shrug off the mightiest of blows. The Alabama is obtainable for every player and provides the same bonuses as a Tier VII premium ship. There’s a bunch of new quality of life improvements too: in-game notifications, more detailed post-battle economic statistics, ship trait descriptions, and a bunch of bug fixes.