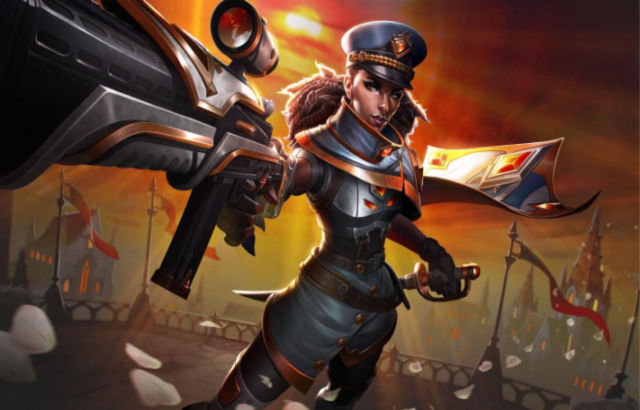 Octavia, the Indomitable, is out today as Paladins’ second Champion this year. Evil Mojo Games is now delivering new Champions even more often than before, based on community desires.

Conflict is ancient, war is perspective. Octavia fights for a better life for us all somewhere past the battles. If there is hope, she will find that spark and fan it into a roaring blaze, inspiring her troops with unwavering loyalty.

“Octavia, the Indomitable, is the powerful battlefield Champion that we’ve wanted in our game for a while,”  says Alex D’Alessandro, Game Designer at Evil Mojo Games. “As a design team, we started with the idea that we needed a marksman rifle weapon in our game. From there, Octavia evolved and became a unique Damage Champion equally able to support her team and deal high damage. Octavia is easy to understand but hard to master – that’s the perfect profile for the Realm’s Commander.”

As a Damage Champion, Octavia is lethal with her main weapon: a semi-automatic Marksman Rifle of uncompromising precision. What’s more, when aiming down sights in mid-air, she levitates briefly enough to puzzle enemies and to land a devastating bullseye.

As soon as a battle begins, Octavia steps into her role as troop Commander, opting for one of four tactics that will strengthen all allies for the entire match.

She deploys a Distortion Field to influence the entire battlefield. This huge dome is see-through for allies but hopelessly opaque for enemies.

Her ultimate is a shield-shattering Creeping Barrage. It forces enemies out of the target area, or else burns them to a crisp.