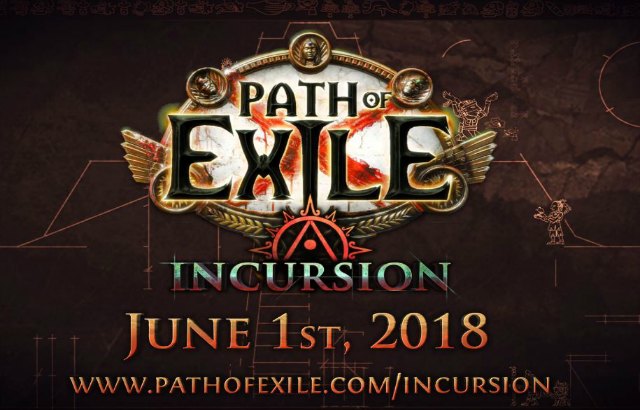 Grinding Gear Games announced today that the next expansion to their hit ARPG, Path of Exile: Incursion, will launch for the PC on June 1, 2018 (with the Xbox One version out a week later). Path of Exile: Incursion sends players on a journey over a thousand years into the past to the long-dead Vaal Empire (introduced in PoE’s very first expansion, Sacrifice of the Vaal, in 2014).

The ancient Vaal treasure temple of Atzoatl has been lost to the world for thousands of years, swallowed up by the jungle. Alva Valai, a relic hunter, has learned that she can locate the ruins of the temple by thrusting you back into the past, through a series of Temporal Incursions into the temple while it was being constructed. Path of Exile: Incursion examines the effects of temporal causality by allowing you to change the future of the temple through your actions in the past. During your Temporal Incursions, you can open doors and slay Vaal Architects, modifying and upgrading rooms in the future. Be careful with the direction that you modify the temple though, as upgraded rooms confer great risks alongside their great rewards.

Path of Exile continues to be one of the largest online action role playing games with continual, massive audience growth. Successful launches on the Xbox One and in China have more than doubled the Path of Exile player community since August 2017, with over 3.5 million players having played the game’s 2017 expansion, Path of Exile: The Fall of Oriath. The Fall of Oriath was recently named one of the Top 50 Games of 2017 by Game Informer Magazine, as well as the top “Game as a Service” (an established title receiving outstanding updates and continued support).