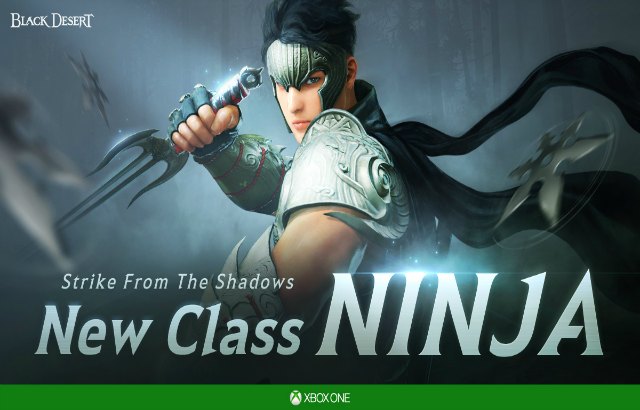 Pearl Abyss revealed that the Ninja character class is now available as a free update for Black Desert on Xbox One. A specialist in close-quarters combat, the Ninja makes his grand entrance today alongside two new guild bosses and Marni Stones, an item to aid endgame leveling.

The Ninja is a high-skill fighter that excels in agility, using dashes, aerial skills and teleportation to rapidly close the distance to enemies. With the ability to conceal his presence, the Ninja can lie in wait before delivering precise, deadly strikes against his opponent. Armed with stun and debuff techniques, the Ninja can easily gain the upper hand in combat.

For Adventurers interested in a challenging fight, two new guild bosses have been added – the electrifying Ancient Puturum in Valencia and the ghastly Muskan of Madness in Serendia. The Ancient Puturum attacks by shooting out electric currents from its body and can regain HP by soaring into the sky to gather energy. For those seeking a more grounded fight, the Muskan of Madness will require substantial teamwork and clever strategies to be defeated. Players who successfully conquer either guild boss can receive powerful new items and equipment.

To aid in boosting players’ leveling ability after Level 57, Marni Stones have been added. By purchasing Marni Stones for each monster type and achieving specific bounties, Adventurers can turn in these stones to gain more experience!