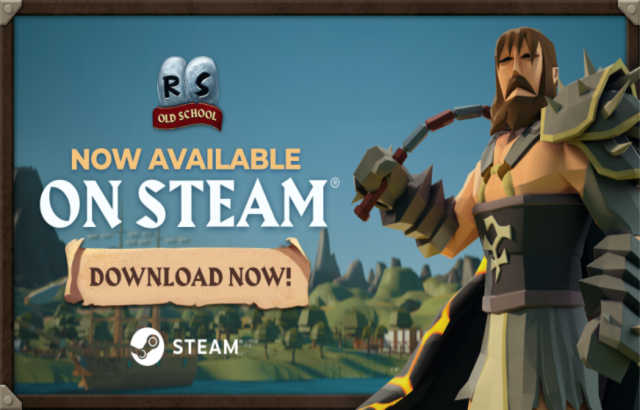 Old School RuneScape debuted on the Steam Store today, extending the nostalgic MMORPG’s cross-platform play by enabling players to link their existing RuneScape account to Steam and carry on playing with progress saved across Steam, the PC and Mac desktop client as well as iOS and Android mobile editions.

The game’s arrival on Steam comes in the week that it marked its eighth year as a living game since launch on 22nd February 2013. The game’s anniversary is being celebrated with an in-game birthday event, which rewards players with a new cosmetic banana cape. With a vibrant community behind it, existing Old School’s players are now gathering in Lumbridge to welcome new players arriving via Steam with a massive meet-and-greet and a community playthrough of the eighth birthday event.

The first ever This Is Old School RuneScape Blog published today on its Steam Hub, delivering a useful walkthrough guide for those yet to join the world of Gielinor, or for returning players that haven’t paid a visit in a while.

“Old School has something for everyone, and this past year we’ve seen it hit new heights: it’s seen the largest number of concurrent players, most members ever, and millions of active players across both the members edition and those who enjoy the game for free on both desktop and mobile. Old School is ever-growing and thanks to a vibrant and empowered community behind it, adventure is now calling for Steam users and I know that our existing players are ready to welcome the new arrivals.”

Old School RuneScape arrives on the PC platform complete with a full suite of Steam achievements, badges, emoticons, and trading cards featuring the game’s most beloved characters and items. In addition, the game offers launch-exclusive content for those who become members via Steam.

The launch on Steam comes as part of Jagex’s mission to continue to make the RuneScape universe accessible to more players around the world. Old School RuneScape will continue to offer both its free-to-play and members versions on Steam, the latter of which delivers an expanded world complete with more characters, skills, storylines, and quests for players to immerse themselves in.

The news follows RuneScape’s successful debut on Steam, which welcomed more players than ever to the world of Gielinor. It has received over 90% positive reviews and 1.85 million unique views on Steam launch live stream.