Secret World Legends: Anima Allocation Is The Best Thing To Happen In SWL So Far

Secret World Legends: Anima Allocation Is The Best Thing To Happen In SWL So Far 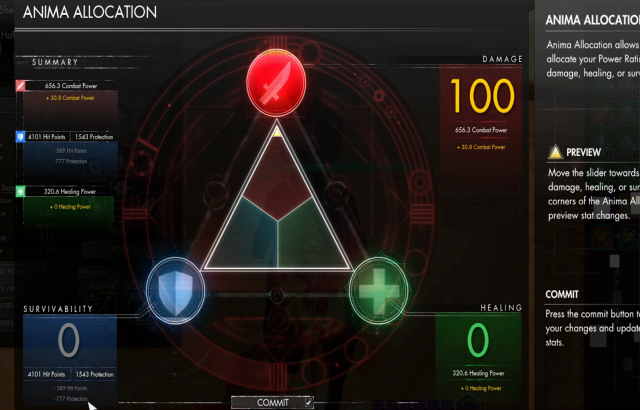 Funcom’s Secret World Legends had a major patch this week, introducing plenty of quality of life fixes to the game. Some of them revolve around the game’s loot system, altering where they drop. Others include adding direct teleports for players to reach all faction hubs, and there’s some minor tweaks for the Elementalism weapon too. All in all, these are great changes that I as a current player can appreciate. But perhaps the biggest change of all is that to how players can now customize their Talisman equipment via Anima Allocation.

Beginning level 20, players will gain access to a new screen on the ability window called Anima Allocation. This pyramid looking panel will allow you to change your talismans allignment from DPS, to Tanking stats or Healing stats. The best part is, you have pretty much free reign to shift it freely, meaning you can just about fine tune your build the exact number. How that works is, each piece of talisman has it’s own Power Rating. They all add up into a pool, and that’s how the Anima Allocation will use them when you shift the indicator around. It’s important to note that this only affects talismans, and not the glyphs and signets that are attached. It also has nothing to do with weapons.

It matters because it completely changes how players will now see the gear grind. New players won’t need to actively hunt for multiple sets of talismans – one for DPS and one for Healing. Besides reducing the grind for new players, even veterans have use for it. Dedicated healers and tanks that need to swap quickly to DPs can do so too, to suit the situation they find themselves in. The Anima Allocation is a game changer, and is one feature that will benefit players in the long run. Of course, if you are a main tank in SWL, this does not really help as much because most of your equipped glyphs and signets on your talismans revolves around defense. So swapping your Anima Allocation to all out DPS will have diminishing returns. Regardless, it’s hard to argue that this isn’t a good feature for the game.

What Else Can Be Improved?

Anima Allocation and the host of other quality of life improvements are only the beginning. Unfortunately there’s a lot of other things that Funcom and Secret World Legends need to work on or fix. Personally, I’d like to see an overhaul of the game’s dungeon finder/party finder tool. It’s pretty useless at the moment and most players just prefer to use chat to find a group instead. And while the loot drop changes are great, they’re only for Elite difficulty and upward. I think a little more love can be shown to Story mode dungeons, as there are a lot of players who do them once and never return. So maybe have a one-time completion reward that offers a decent some of Anima Shards to help with that grind? Just a thought.