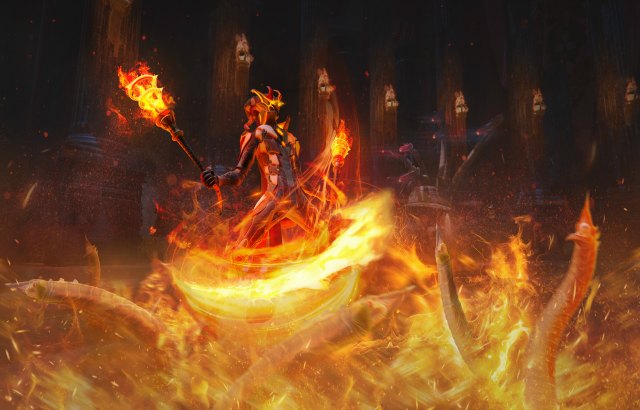 Skyforge has some exciting news for its players this. MY.GAMES has revealed that a brand new expansion is coming to Skyforge the MMO. Dropping in September, Ignition will broaden the world of Aelion with all-new content and lore surrounding the banishment and return of the Elder God Kir.

This all-powerful mage, along with his army, the Cult of Flame, plans to rebuild the glory of their cruel, forgotten empire. The expansion also introduces the Firestarter class, the first fire-based class to enter Skyforge. The free “Ignition”expansion will erupt in Skyforge this September on PC, PlayStation 4, and Xbox One.

The Firestarters are the eighteenth new class to join the ever-expanding roster of legends available in the Skyforge universe. Descendants of Kir’s fire-worshipping followers, Firestarters are ranged damage dealers with an uncanny control over fire magic. Dark tricksters with a theatrical appeal, they wield chained torches that allow them to unleash swift and agile attacks against non-believers. They also possess an impressive array of pyromantic spells, ranging from blazing hot fireballs and fire breathing, to the full wrath of cataclysmic hellfire summoned from the sky. Their nimble movements and great range make them an awesome addition to any team of Immortals!