Star Trek Online: The Fall of the Old Ones Brings Halloween To Space, Finally

Star Trek Online: The Fall of the Old Ones Brings Halloween To Space, Finally 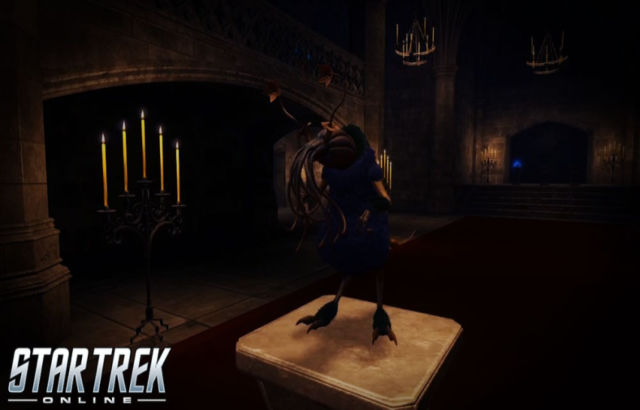 Starting now, Star Trek Online players can join the game’s first-ever Halloween event, The Fall of the Old Ones, on PC, Xbox and PlayStation consoles. Like the “First Contact Day” event, this new three-week celebration begins with a single event and will be expanded over time. Captains will beam down to an ancient castle on Pyris VII, where they will encounter the Old Ones, the same iconic aliens introduced in the Star Trek: The Original Series episode “Catspaw.” These extragalactic beings have traveled to the Milky Way to study humanity, but their plans have been disrupted by the ghost-like Devidians. This new Task Force Operation brings your Captain into the same maw of terror first faced by Captain Kirk, Mr. Scott, and Dr McCoy.

Captains who are brave enough to navigate the darkness and fear that plagues The Fall of the Old Ones will unlock a Old One Vanity Pet and a Transmuter Wand Universal Kit Module, which transmutes its targets into a sentient black cat who disables the shields and powers of its allies. To obtain these in-game items, Captains will need to earn one daily progress per account, per day, for two weeks, by playing the brand new Task Force Operation, “Cat’s Tale.”

Participating in this event grants daily progress towards the Grand Prize: The Transmuter Wand Universal Kit Module, and the Old One Vanity Pet. Additionally, the first character on your account that claims this reward will also receive 25,000 Dilithium Ore, and 3 Featured Episode Reward Boxes. Obtaining the Grand Prize requires 14 daily progress, and Captains can earn one daily progress per account per day by playing the brand new Task Force Operation: Cat’s Tale!

Captains will also have the option to purchase their remaining progress in the event with Zen. The price for this buyout will prorate, based on the amount of progress a Captain has completed.