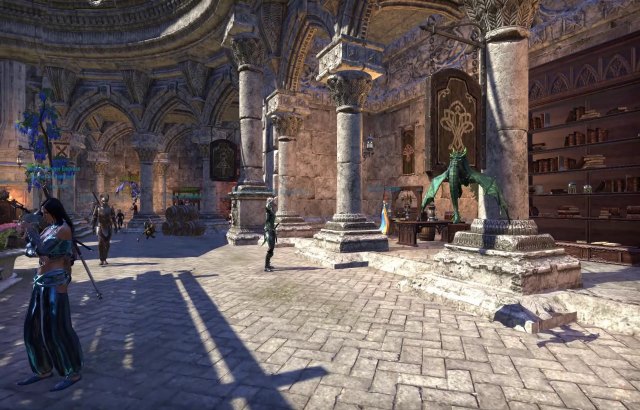 Let’s take a look at some of the best MMO towns, hubs and cities when it comes to offering player convenience. For starters, we have nominations for the Elder Scrolls Online, Star Wars the Old Republic, Guild Wars 2 and Lord of the Rings Online.

First up is the Elder Scrolls Online, which has plenty of marvelous, looking alliance cities, but nothing captivated me more than the city of Alinor in Summerset, which was introduced in 2018’s Summerset Chapter. Why are my characters parked here all the time? You guessed it, it’s convenient for a multitude of reasons and for my personal needs. This little area in the bottom corner of the city is where all the crafting stations are placed in a horsehoe shape, and of course you have the daily task boards inside. So my usual routine is to pick them, up, make the rounds to craft what’s required, and then the drop off point for deliveries is just right outside to the left, and it barely takes 30 seconds to get there.

For banking, I’ve made it easier for myself having purchased the mobile banking NPC, but for those who haven’t, a short travel up the stairs north and you’ll reach the bank, and guild traders too for your market-place needs. It also helps that the Wayshrine is really close by, and Summerset itself isn’t too big of an island so you can head out of the city and go kill some daily World Bosses or get rid of some geysers if they pop up. All round, Alinor is my current favorite city hub in The Elder Scrolls Online right now until I find something better.

In Guild Wars 2, it was really hard to pick a location because one of the core tenants of the game is player convenience, meaning most places are usually fantastically designed with the players in-mind. For starters, every major city of the game’s main races offers everything you need, and while large, traveling around using waypoints or mounts these days makes it easier, but Guild Wars 2 does have these things called lounge passes, that takes you to an exclusive location which offers crafting stations, banking, economy, vendors and more, all in a small enclosed space with literally no travel downtime. 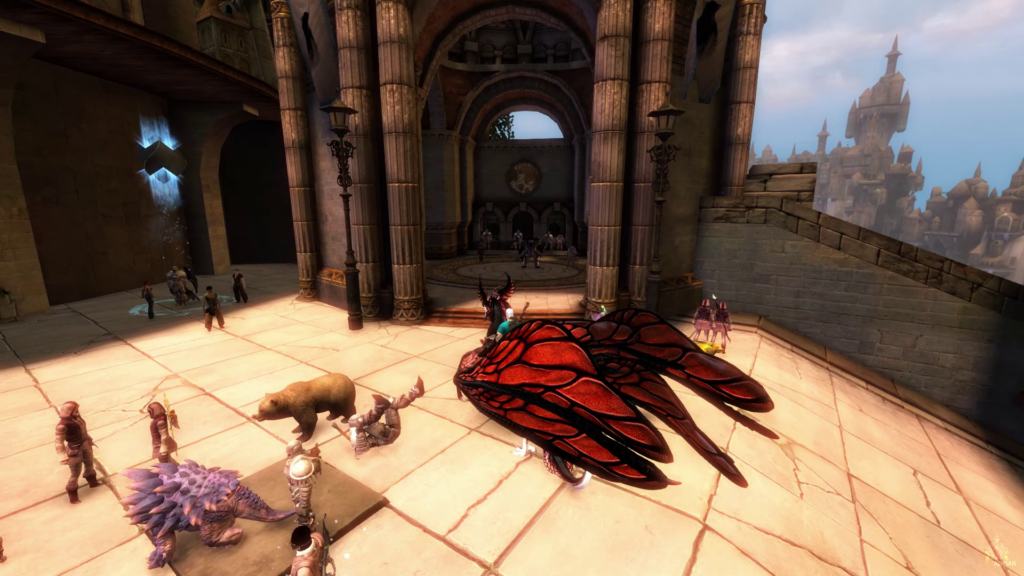 Out of all these premium mini-hubs and lounges, my go-to location is the Lily of the Elon, a small lounge located on an artificial island south of the free city of Amnoon, in the path of fire expansion. The design is circular, with vendors, banks and auction house on the lower outer level, crafting stations on the first level, and the mystic forge on the outer third level. Not only is the lounge great for the basic stuff, but it’s also convenient for getting to the content. You have all the crystal oasis bounty boards within, plus the lounge is close to the Amnoon city events, especially the casino coin collection one that leads to the Choya piñata, which drops an item that will make you rich. Alas, the only way to get in here to my knowledge, is you have to have purchased the deluxe or ultimate edition of the path of fire expansion in order to receive the invitation item, that teleports you to the Lily Elon whenever clicked.

In a galaxy far, far away, the choice for the most convenient hub is an extremely easy one. If you haven’t guessed it already, it’s the Fleet for your chosen faction. Both the Republic and Sith Empire fleets are pretty much designed similarly, with there being one massive level you’ll zone into from your ship’s hangar bay or from the fleet pass, and you can make your way around the fleet clock-wise or anti-clockwise to get to what you need. The fleet has pretty much everything on the main level, and it’s conveniently placed in sections that you can easily see on the map, so there’s no getting lost. 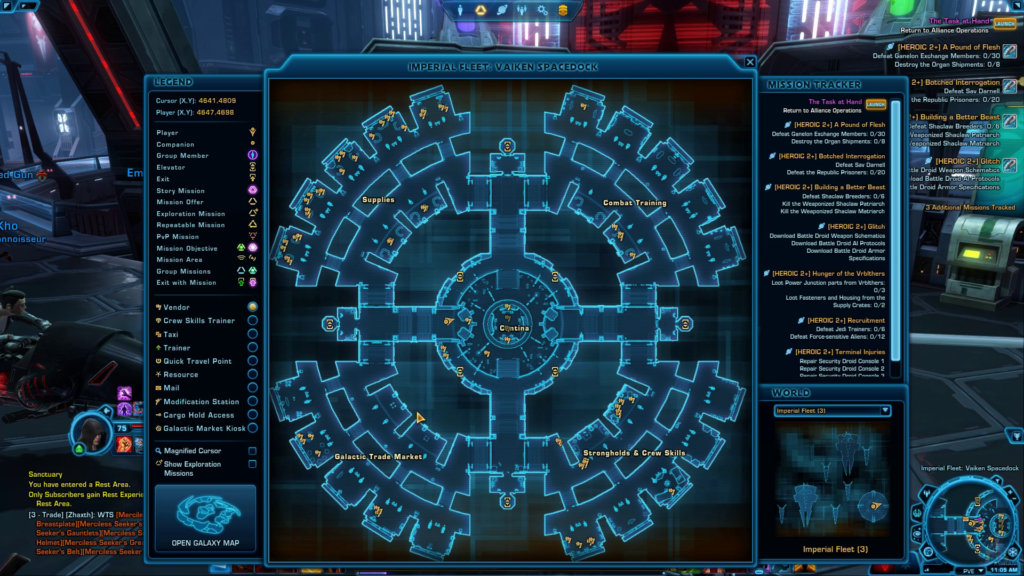 Taking the elevator down you’ll get to the another level or rep vendors and other traders, there’s the group content bay to pick up FP quests and more, and the inter-ship travel is also available for other content. Your own ship and stronghold aka housing in SWTOR are decent shouts but as SWTOR lets you place mailboxes, banks and auction terminals within them so you never really have to set foot on the fleet if all you need to do are just the basic things, which is super convenient.

The town of Bree is probably the most popular spot for majority of players, doesn’t matter if you’re a new player under level 30 or an end-game player, everything leads to Bree, and Bree leads out to everywhere quite literally. The town’s design is neat, and split into three distinct sections. You have the west part of the town which has its own stable-master that connects to a good variety of other cities, towns and hubs, and there’s also a bank and some crafting stations nearby. You’ll  also find a festival horse taking you to the horse-fields when in season. The North and mid-section is really for the RPers, musicians, and when the anniversary festival rolls around, the fireworks show. You’ll also find the prancing pony and a stage for bands here. 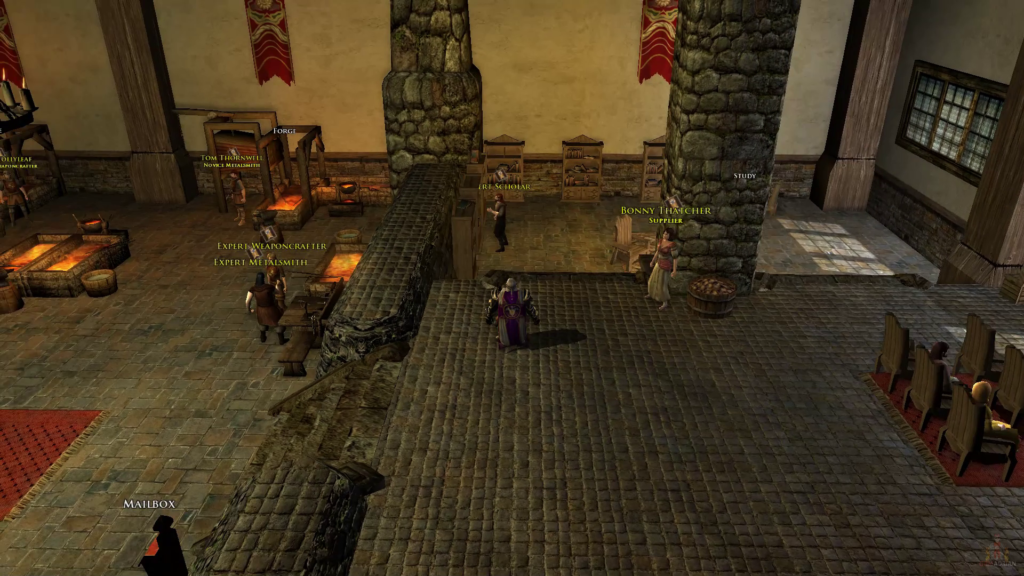 The middle section is home to the Bree crafting hall and it’s probably the best place to craft besides Esteldin or wherever else the new crafting guild masters are, simply due to the fact that the bank and auctioneer are just a turn away and you can grab whatever you need to carry on crafting or clear your bags. The southern part is the Uber heaven, because the stablemaster connects to every important location known to man, hobbit, dwarf and elf. It’s also got another bank and auctioneer across the street, some more crafting stations and the relic masters for your LI weapons. All round, the town of Bree has something for everyone of all levels, and it’s not a nightmare to navigate on foot or steed.