The Party Hat Hunt Returns To RuneScape After 20 Years 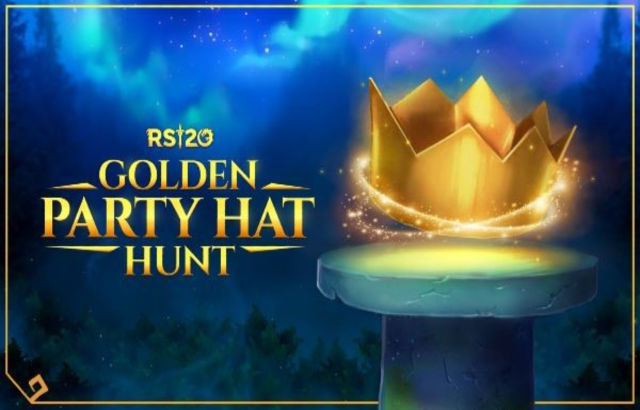 After being unavailable to earn in-game for 20 years, RuneScape’s rarest and most valuable of item – the Party Hat – returns to the game today in The Golden Party Hat Hunt.

A special event as celebrations for RuneScape’s 20th anniversary year comes to a close, The Golden Party Hat Hunt gives players the one-off opportunity to earn an all-new gold edition of the elusive, precious item. Golden Party Hats are only available in this time-limited event and players have until January 3rd 2022 to claim their crown. After the cut-off date, they will never be available to earn again!

The original Party Hats were exclusively available to players two decades ago in RuneScape’s 2001 Christmas event. The hats were introduced as a festive novelty cosmetic item and intended to be worthless and disposable as they didn’t provide the wearer any benefits or stat bonuses, leading to many players immediately discarding them.

However, those that held onto their Party Hats of the years became the elite few and the hats themselves became an investment. The rarity of the item, coupled with the significance of owning a Party Hat as a status symbol for players who had been with the game since the beginning, saw demand soar.

Over the years, Party Hats were changing hands between players for millions of gold pieces and, in 2015, they hit 2.1 billion gold – the maximum value tradable in a single transaction on RuneScape’s Grand Exchange. The hats now play a pivotal role in the RuneScape economy as investments, cash placements, staked items, and collectables.

After the 2001 event, Party Hats were never made available again – until now. Today’s in-game launch of The Golden Party Hat Hunt once again gives RuneScape members the chance to earn what could become a tradable rare item.