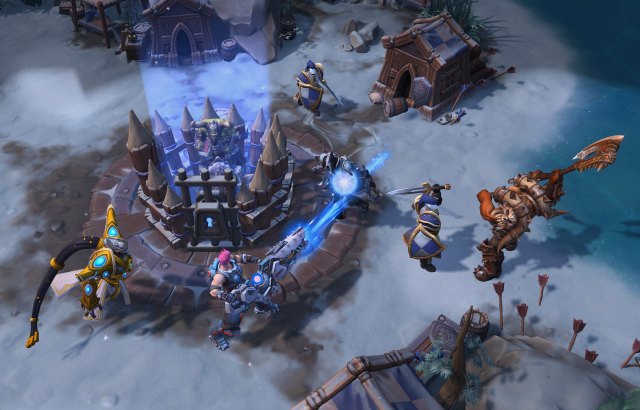 The Warcraft universe has come to the Nexus in a big way with the arrival of Alterac Pass, now live on the Heroes of the Storm PTR! This new three-lane battleground is inspired by the iconic World of Warcraft battleground Alterac Valley.

In additional, we’re welcoming a new Warcraft Hero to the fray—Yrel, the first-ever Draenei to enter the Nexus. You can also test your mettle in the epic Echoes of Alterac in-game event, which asks you to declare your allegiance for the Horde or the Alliance. Once you choose your side, you can win Heroes, portraits, banners, and mounts through a series of quests.

For details on the new Warcraft-inspired content coming to Heroes of the Storm, please see the attached fact sheets. You can also visit our Echoes of Alterac blog post.

Prison Camps: Capture the enemy Prison Camp to summon your Cavalry. Camps can be retaken by Heroes and Minions, so guard them well.

Cavalry: Cavalry soldiers charge down each lane when summoned granting increased damage and movement speed to nearby Allied Heroes.

Generals: Each team’s Core has been replaced by a General who fights against attacking enemies. Destroying a Keep reduces the General’s Armor and damage.

For more info, check out the blog post here.