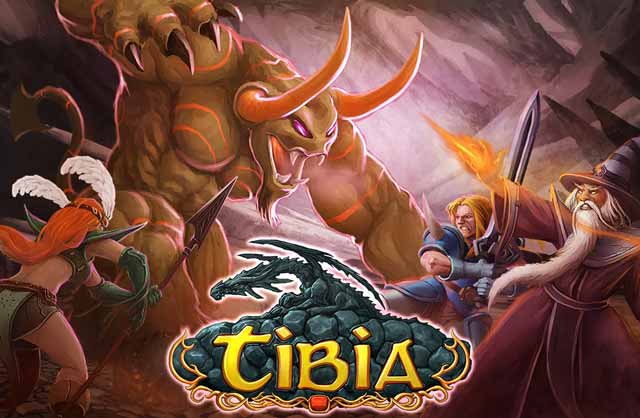 With the hype of Chronicles of Elyria launching officially as of 2017, the reviews done based on it had prompted me to question where did this inspiration came from. Was there a precursor or something similar to this? Then I remembered, yes, what else but Tibia Online.

Tibia launched in 1997 but the game only made a hit, years after. Developed by CipSoft, Tibia is a 2D styled MMORPG much like Diablo 1, enough to be considered an old school. The game is still loved today as it has similar aspects to that of Bloodborne, Dark Souls and possibly much worse. One of the most notable players is Felix Kjellberg under the name of PewDiePie who is the most subscribed YouTube gameplays celebrity.

Perma-like death, enough to trigger you.

This feature is probably why the game is popular amongst MMORPG players, regardless of those who play or those who don’t. Upon death, you lose everything. Not even kidding, everything. All the long hours of clicking, grinding, collecting, finishing quest and so forth. If you’re the type who gets easily frustrated, this game would piss you off. Imagine just questing in a dark scary dungeon or through the murky woods, and you ran out of potions and died. Whilst those who are not aware that Tibia Online is not just a cutesy old school rpg game, the gameplay is utterly savage and relies on the ability to co-exist with other players and pure skill.

Oh, did I mention that the game is open-world PVP oriented as well? No? Well, now you know. The game has multiple servers orientating between levels of PvP and player freedom, but none the less, the PVP is toxic. Get ready for a boiling hot session, betrayals and computer-breaking finales. Just make sure you’re on the right side and avoiding all the PVP-open areas.

Overall, I would say that this game is epic and surreal. This is not your standard MMORPG with save points and instant revival. But you lose your body and regain it by starting back from Level 1. In reality you would die but, it’d be annoying for players to create another account and this is as far as the developers will go.

As far as I know, the NPCs in Tibia Online are extremely interactive such that mentioning certain words may get you killed, or laid…? (I’m just kidding, besides the death part). One part that is popular are players cussing in front of the “King”, this would prompt the system to instantly kill the player. Many experienced players use this to bait noobs and steal all their loot. It is both hysterical and a tragedy, but most hilarious. While you’re interested in going for large boss fights that require a party or just trading, be on the lookout. You never know when you’ll be stabbed, blasted or disintegrated from behind.

The game also features housing systems, explorable areas, major events and gatherings, and much more. Despite having low system requirements and quality of graphics, the game relies plenty of the imagination of players and their ability to interact with one another. Of course there are also restricted-PVP areas and rules and regulations maintaining the order within the game. For a game so simple, there is so much to do.

So, what are you waiting for? It’s a fun game and easy to download. Go get killed, tricks some noobs, perform rituals, join a cult, kill epic monsters and explore the never-ending world that is Tibia Online.