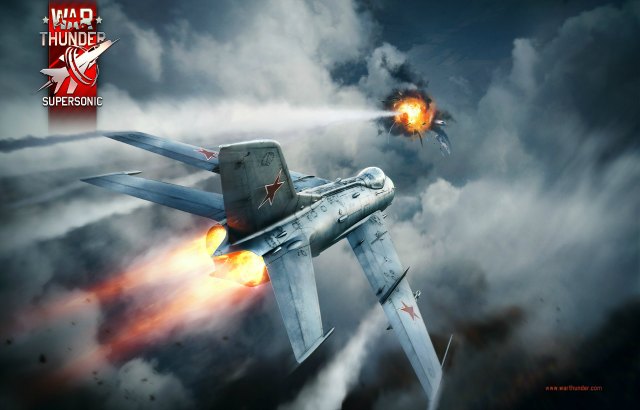 With Update 1.85, Aviation in War Thunder has seen the dawn of a new era of air combat. The game’s previous five ranks of aircraft have been extended by the new top Rank VI, which will house several new near- and supersonic aircraft armed with guided air-to-air missiles. The first modern jet fighters to join War Thunder will be the American F-100D Super Sabre, the British Gloster Javelin Mk 9 and the Soviet MiG-19PT. Combat at supersonic speed will be subject to War Thunder’s realistic physics model, allowing players to observe the cone-shaped vapor cloud and those on the ground to hear the characteristic “sonic boom”.

Aircraft on Rank VI, as well as helicopters, can now be equipped with infrared guided air-to-air missiles as a new type of armament. These early guided missiles, while lethal when striking an unsuspecting enemy, are not very maneuverable and can be avoided by quick evasive maneuvers. A new warning system, which will alert affected players of an incoming attack, will help to do it in time. On helicopters, which are more limited in their evasion abilities, players can deploy infrared countermeasures for their own protection.

The Ground Forces of War Thunder have also seen a major addition this update, with almost 30 Italian vehicles from the 1930s to the end of the Cold War now available in-game. This includes vehicles such as the Breda 501 and B1 Centauro, which are excellent examples for Italy’s impressive lineup of fast and powerful wheeled combat vehicles. The anti-aircraft tank OTOMATIC is also sure to please Italian tankers on higher ranks, as its fast and powerful 76mm cannon with both sabot and proximity-fuse shells can punish enemy tanks and aircraft equally efficiently. For the other nations, the new vehicles include the long-awaited T-72A main battle tank for the Soviet Union, the ATGM-equipped infantry fighting vehicles M3 Bradley and Type 89  for United States and Japan respectively, as well as the Israeli Sho’t Kal Dalet, a modified Centurion tank available for Great Britain.

New locations for War Thunder include Vietnam, a new battlefield for tankers with the characteristic thick vegetation, narrow paths and coastal villages popularized by Vietnam War movies. Pilots can now dogfight over the skies of ‘Afghanistan’, depicting a modern-day version of the mountainous state featuring big cities among vast mountain ranges, while captains will be able to go to battle around the ‘Tierra del Fuego’ archipelago at the border of the Atlantic and Pacific oceans.