Which Class Should You Play As On Battlefield V?

Which Class Should You Play As On Battlefield V? 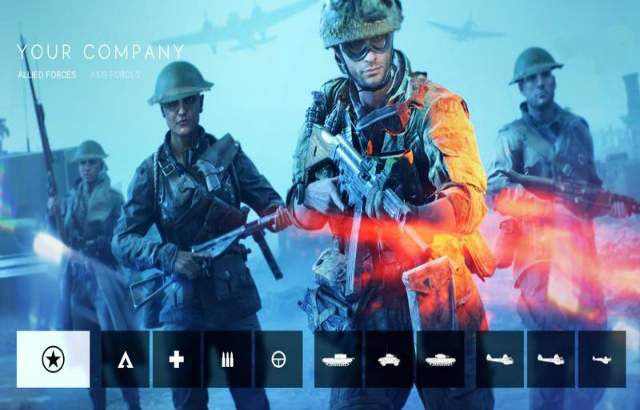 Battlefield 5 is out of its honeymoon period since launch, and plenty of players have jumped in since the recent sale on Origin. If you’re completely new to Battlefield V and wondering which class suits you best? We’ve got you covered! For starters, for those new entirely to the franchise, here’s a little bit about the game. BFV is set in World War II, and offers large scale multiplayer modes featuring team-based matches. You’ll pick a class and be dropped into a squad of four including you, and depending on the game mode you’ll either capture and hold objectives, or destroy every last man and woman on the enemy team. Because majority of the multiplayer relies on squad matches, picking a class will be important to turn the tide of battle and suit your play style.

If you’re all about going in to battle all guns blazing with death and destruction, then Assault is your go to class. They are the experts of sowing chaos – perfect for harassing the enemy and demolitions, and they’re great fighters whether you’re talking close, medium, or long-range fights. If you like to be right in the middle of the action, and subtlety isn’t your strong suit, Assault may be the perfect Class for you. Just bear in mind that you’ll also make a great target for enemy fire, so keep an eye on your health and either heal up or beat a hasty retreat when it starts to dwindle. 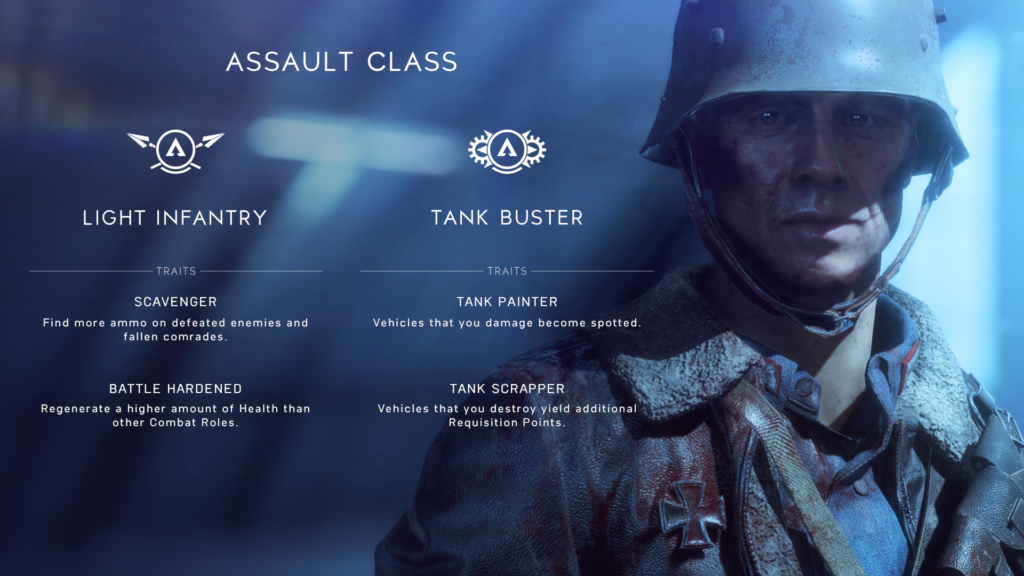 Sniping is one of the most popular playstyles not just in Battlefield V, but most FPS games, so expect Recons to be popular all round. Recons are equipped with bolt-action and self-loading rifles, ideal for picking off enemies at long range. Their Spotting Scope and Flare Gun give them an easy (and effective) way to let the rest of the squad know where enemies are massing or hiding out, too. Wise Recon players will always keep a sidearm handy, just in case an enemy gets too close, and avoid tangling with vehicles whenever possible. 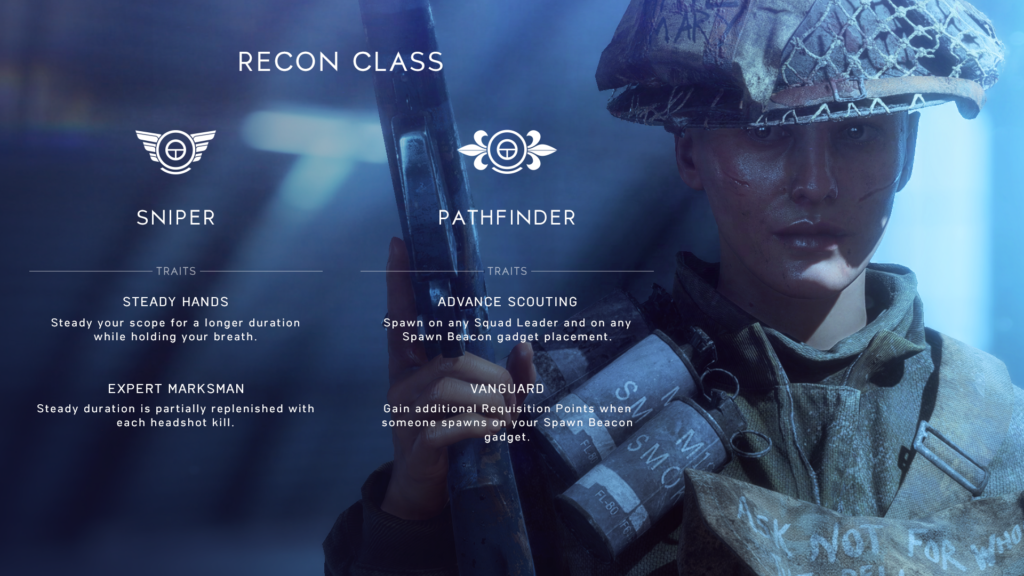 The Medic is a little underpowered when it comes to combat with its early weaponry, but they are in-demand the most. Medics are all about healing up and reviving their squad and teammates. Submachine guns and really, really big needles are their stock in trade. The former helps them clear enemies at close range and the latter keeps friendly soldiers from joining the choir invisible. They can toss out healing on the go with Bandages, or set up a stationary healing station with their Medical Crate. But they should try to stay close to Assault and Support players as they’re not the heaviest hitters on the battlefield. 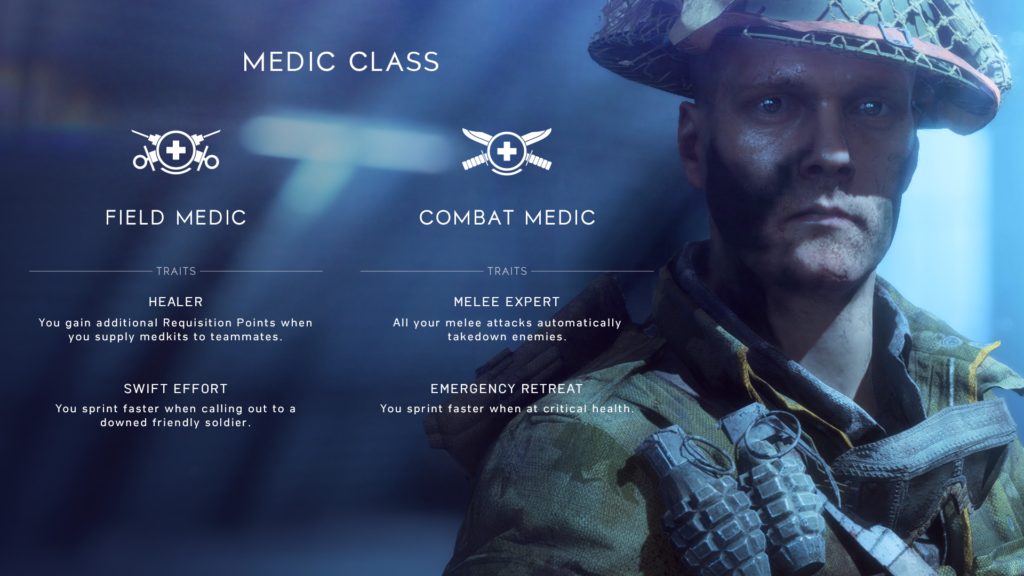 And finally, we have the Support class. For players who like both defending objectives and keeping your squad’s ammo replenished, this is the best class to do that. Players will be able to get your hands on light and medium machine guns, allowing you to effectively suppress your enemies. But you’re also the keeper of the ammo, and dispensing Ammo Pouches as well as creating ammo stations will make you very popular. Blowing up enemy Fortifications, vehicles, and positions with your AT Grenade Pistol, AT Mines, and AP Mines will make you even more popular. 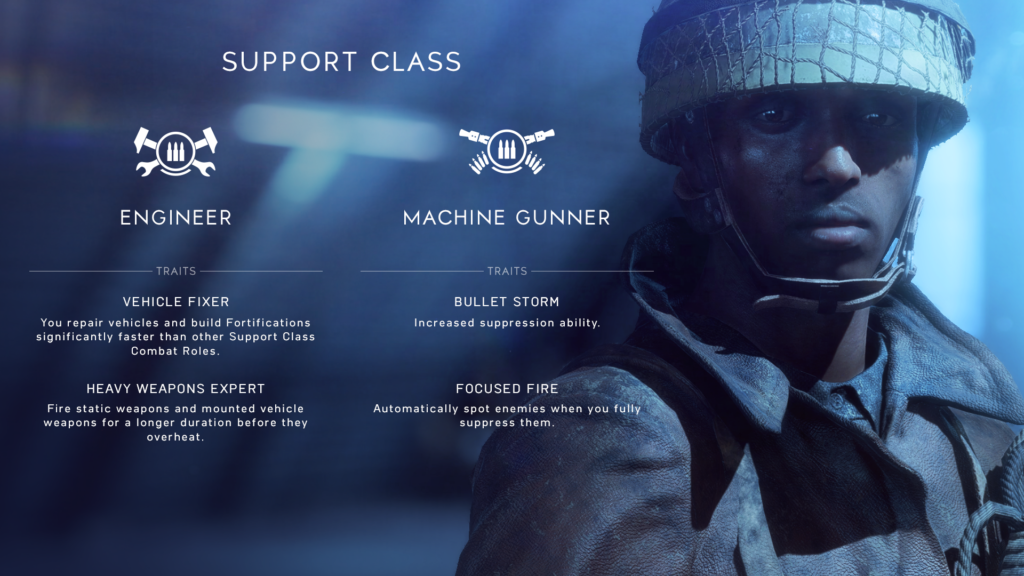