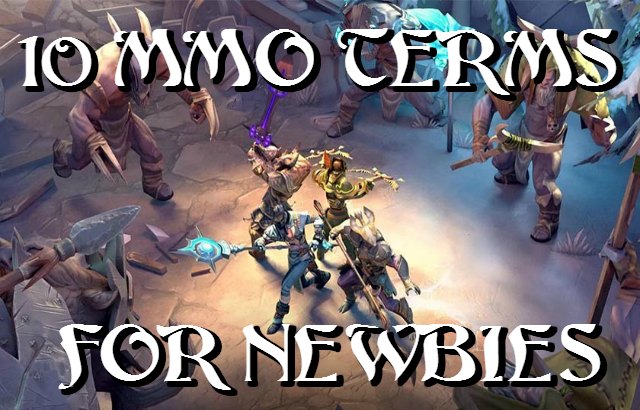 MMO terms, jargon and acronyms are as old as the grandfather of all MMORPGs, Ultima Online. For nearly two decades now, players have been using a variety of these terms to communicate with each other in game. The terms themselves vary based on situation, but there are a collective few that are basic must-knows for the average player. Some affect your daily activities such as economy and trade, while others have to do with combat and grouping.

If you are a new player, worry not! We’ve compiled a list of the most important mmo terms for new players here. Once you get the hang of these, understanding the old timers will become a lot more easier. This should help you blend in, no matter what game you’re playing! Let’s begin.

WTS, WTT and WTB are probably the most common terms you will find in any MMO when it comes to economy and crafting. They stand for Want To Sell, Want To Trade and Want To Buy respectively. From a gamer’s stand point, that’s a little too long to type out in chat, hence the acronyms. Throughout towns and in chat, depending on the game, it’s very common to see these terms being thrown about if players are looking to to start a trade or sell their wares. So the next time you see someone advertising a WTS for an item that you need, don’t be afraid to reach out and get in. Similarly, if you want to craft gear and sell them, start using these terms to attract the attention of other gamers in chat!

PC is the acronym for Price Check. This term is used often in chat when players who want to sell an item doesn’t know what it’s going for in the current marketplace. This is a very handy term if you are looking to sell rare items, or are very far away from town and the auction house to check the price yourself. Don’t be afraid to ask for a PC on the Sword of Logos in chat for example, if you need a quick answer from somebody near a marketplace.

And now on to our first combat related term. In most MMOs dating back to the beginning of the genre, Line of Sight plays a huge part in how players influence the AI in combat situations. In dungeons for example, players would use LoS and hide behind a pillar or an object to bring the boss or mob closer to the group. Or out on the landscape, LoS is simply used to pull ranged enemies from their spots to venture further out to where players will have an advantage to attack. It’s a handy term to know, because you’ll never know when a raid leader says “Okay folks, let’s head back there to LoS the boss!” and everyone moves but you.

I’m sure everyone probably knows what DPS means by now. On the chance that you are really minty fresh to MMOs, it means Damage Per Second. It’s a term used to measure the amount of damage your avatar does in a second. It’s also become embedded as part of the trinity of classes, and how players refer to them. Damage classes are known as DPSers, and then there’s the obvious healers and tanks. DoT on the other hand, refers to Damage Over Time. In all MMOs, some classes deal damage over a period of time, and the term is used to signify those skills. The same can be said for Heals Per Second and Heals Over Time.

AFK stands for Away From Keyboard, and is another popular term that is used general gaming and not just MMOs. It’s used to notify others that you need to take a bio break, or need to get away from the computer to deal with something. In MMOs, it’s very common to find players saying they are going AFK, and some games even have a /afk command to put an afk tag on your character.

When it comes to social play and grouping, these terms are important for new players. They are Looking For Group and Looking For Raid respectively. Often time, you will notice that some games have dedicated chat channels for finding group members to run content. In some older games, you will have to manually find players this way if there isn’t a group finder. Therefore, it’s common to see players post “LFG Dungeon Of The Mad King” in chat.

PK stands for Player Killer or Player Killing. PVP is a huge and important part of most MMOs, and seeing the term PK simply refers to the action of killing players. Some MMOs will have PK Zones which means that PVP will happen in this zone. In other times, it’s common to see the chat point out that a certain player is a PK, thus be careful when you see his avatar.

Now let’s move on to a more technical but common term. WAI stands for Working As Intended, and is used to clear up any confusion about gameplay that doesn’t seem right. For example, after a a hotfix patch, a quest may be bugged. Thus, it’s common to see players ask in chat “Is this WAI?”. So if you happen to be in such situations where you’re unsure if it’s a bug or you’ve missed something, don’t be afraid to ask if this is WAI.

Perhaps another very common term is F2P. It simply stands for Free To Play. Within the game, you possibly might see players labeling another group of players as F2Pers. This means that they are free players. It’s very common in games that are free but also offers premium subscriptions.

And finally, we have OOC which stands for Out Of Combat. A lot of the time, this is used in games where RP or Role Playing happens. For players who want to talk generally in chat and get out of character, it’s common for them to use an OOC chat if the game has one.

Do you happen to know any other MMO terms that you think new players need to know? Share them below in the comments!