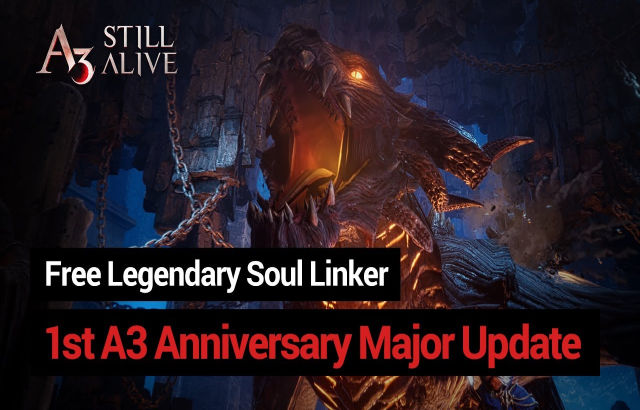 Players can now access the new territory of Tuaki, which includes a new ‘The Derelict Buried Tomb’ equipment dungeon, a new ‘Red Monster Kazan’ world boss, along with a ‘Forest of Change’ war zone dungeon and a new ‘Swamp of Silence’ raid to experience. To gear up for the new territory, the Level Cap is increased to 200 and a series of Level 190/200 items are now available to earn. The Fourth Level Awakening for accessories is also available while a newly added ‘Boss Option’ system will provide extra stat bonuses for a player’s equipment set.

Netmarble is also giving back to A3: Still Alive players with the following in-game activities:

Set in an apocalyptic fantasy world of swords and sorcery, A3: Still Alive is a cross-genre mobile experience that pairs the enormous and living worlds of Open-World RPGs with the extreme combat of Battle Royale. Players must be vigilant in an always-open Player vs.
Player (PvP) environment as they fight against enemies with intense hack & slash combat and prove their mettle in a variety of PvP and Player vs. Environment (PvE) modes. A3: Still Alive is beautifully rendered with splendid console-quality 3D graphics that are brought to life thanks to the outstanding optimization of the Unity Engine.

A3: Still Alive is now available as a free digital download (with in-app purchases) on Apple’s App Store and Google Play, in 172 countries around the world. The game is also available for download as an Open Beta for Windows PC via A3: Still Alive’s  website.