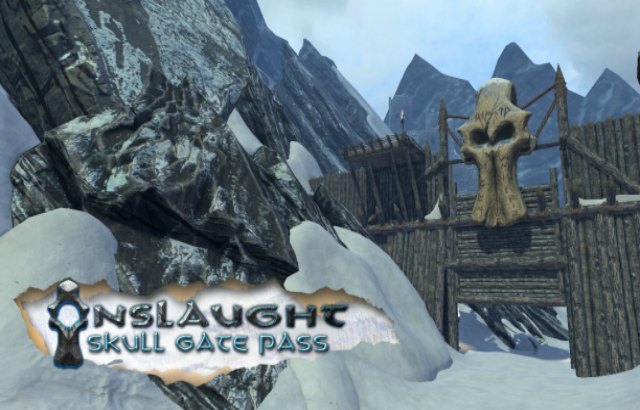 Funcom and Age of Conan has announced some brand new content for the free to play MMORPG. Starting this week, all players can queue for the latest Onslaught, the Skull Gate Pass.

Available right now to queue for in the newly-revamped Group Finder, Skull Gate Pass is set in the snowy peaks near Hyperborea, taking form as a new horde defense scenario similar to Kuthchemes Temple Onslaught. The vile Hyperboreans are poised to strike the Border Kingdoms; it’s up to you, the mightest of Hyboria, to halt their onslaught!  Join Valkyrie Hylda in warding Skull Gate Pass against the vast armies of the Witch Queen Vammatar.

Valkyrie Hylda, found in Old Tarantia, beseeches the aid of Hyboria’s most ferocious heroes, requiring protection as she works to complete a blood-fueled rite at a holy site near the Pass. Once you’re transported to the playfield, you’ll find Valkyrie Hylda waiting patiently for you under the gargantuan mammoth skull adorning the eponymous Skull Gate Pass.  Speak to her once to begin; she’ll escort you to a nearby site you must defend.  From here, you have a moment to explore the map before the onslaught begins – speak to Valkyrie Hylda once again so she may commence the ritual.

Expect all new rewards from this Onslaught, and more details can be found on the post here.