AAion is a 3D MMORPG where two factions are at war and battle to control the land of Atreia; the game was released in 2009 with a subsctiption model but moved to free to play in 2012. It was developed by the Aion Team at NCSOFT and the team is still creating new content regularly for the game.

There are two factions to select between and only one race per faction however the game contains detailed customization that allows players to create unique appearances for their characters; players have 6 basic classes to select between at the start of the game. As the game progresses the player can specialize into one of the two sub-classes in their basic class which provides more play-style specific skill choices. In addition to classes there are also various professions to level into.

As the game progresses the player will gain a pair of wings that allow the player to fly for a limited amount of time; there are ways to upgrade them so that the player can remain in the air for longer. New skills are learned from skill books or from Stigma Stones which allows players to level up however they choose.

Combat and PvP is one of the main features of Aion and is unique compared to other MMORPGs; the combat is relatively engaging and the game features a range of PvP options. Players are able to engage in one-on-one duels and the unique Rifting mechanic allows players to travel to the other other factions’ zone to slaughter unsuspecting players. These rifts open on a fixed schedule and in a specific location, they remain open for one hour and provide the defending faction with special defense quests to kill the invaders. 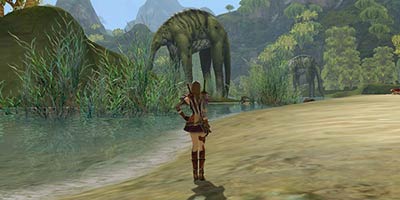 The game has a unique PvPvE game-mode that takes place in the Abyss where players over level 25 can engage in combat to control various structures and items. In this mode players battle to control Fortresses and to obtain Artifacts which provide the controlling team with bonuses; the two sides of players also need to deal with the high level NPCs on the map.

Aion offers its players a lot of content and features interesting PvP game-modes which make it stand out from the other games in the genre; it does have a pay to win element to the game as players can purchase game-play boosting items that can increase drop rates or improve weapons. This is a solid MMORPG which offers content for all types of players.