Albion Online hasn’t had the best of times since launch on Julth 17th. Since release, the game is being targeted by gold selling companies or RMTs, who are now holding the game ransom. Due to stern action taken against these RMTs, the latter have apparently paid to have the servers DDOSed, as seen in the picture below. 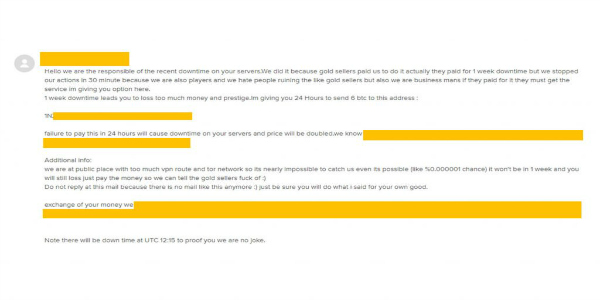 Whether you believe the claims or not, developers Sandbox Interactive have been very open about what’s going on. Despite large amounts of players not being able to play due to the server capacities, DDOS remains the bigger problem. Server crashes and load can be improved over time, but constant attacks by hackers won’t stop until their demands are met. Albion Online however, is committed to battling this and have said that they will not meet the demands of the RMTs.

Therefore, to compensate players that have been affected by all the downtime, SBI will be giving out the following. A total of 14 days extra premium time will be rewarded for players affected between July 17th and August 11th. The compensation should already be rolling out, as it is intended to reach players by August 12th. To check out the developer’s note on compensations, click here.