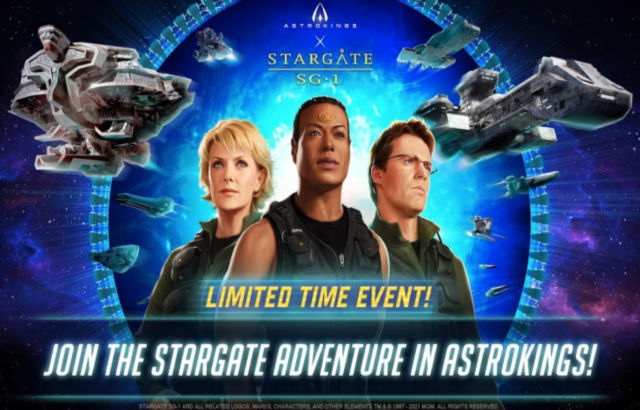 The SG-1 crew sports new uniforms based on Stargate SG-1 Season 10 and are joined by a bevy of content, including the famous Stargate and Supergate, iconic flagships, the Odyssey and Prometheus, and an Ori spaceship which can be destroyed to obtain rewards and more.

Over the course of nearly 30 years, Stargate has become a cultural phenomenon, capturing the imaginations of sci-fi lovers and inspiring legions of fans around the world. The Stargate franchise includes three TV series, three films, an animated series and a web series.  More than 56 million Stargate DVDs have been sold as well.  Living well beyond the screen Stargate has found its way into games, comic books, trading cards and more.

In ASTROKINGS, players clash with rivals in powerful cosmic spaceship battles, manage futuristic resources and build planetary facilities on countless worlds. In a bid to become the absolute galactic imperator in the epic sci-fi real-time strategy multiplayer experience, players build their own starship fleet, customize it with powerful weapons, and command it either solo or with an alliance team to conquer the galaxy.

Players can take part in the second limited-time Stargate event by downloading ASTROKINGS on the iOS and Android stores.