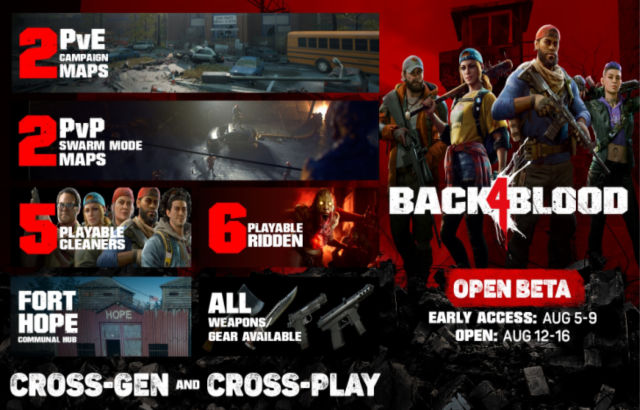 Warner Bros. Games and Turtle Rock Studios today released a new Back 4 Blood trailer showing off the intense cooperative and player-versus-player (PvP) action that participants can expect from the upcoming Open Beta, which begins with Early Access on Aug. 5. The Open Beta will feature the all-new PvP mode, “Swarm,” where two squads of four face off in a best-of-three series of rounds swapping between playing as the Cleaners and the Ridden, as well as additional campaign content.

The Open Beta will begin with an Early Access portion from Aug. 5-9 for those who pre-order the game. Players can also register at Back4Blood.com/Beta for a chance to get into the Early Access portion*. The Open Beta will continue from Aug. 12-16 and be available for all players. Both Open Beta portions will be playable on Xbox Series X|S, Xbox One Consoles, PlayStation 5, PlayStation 4 and PC.

The Back 4 Blood Open Beta will feature the following content:

Back 4 Blood is a first-person co-op zombie shooter from the creators of the critically acclaimed Left 4 Dead franchise and features thrilling, dynamic moment-to-moment gameplay and highly variable, customizable action to keep players coming back for more. The Back 4 Blood story takes place after a catastrophic outbreak where most of humanity has either been killed or infected by the parasitic Devil Worm. Hardened by unspeakable events and emboldened to fight for the last of humanity, a group of apocalypse veterans called the Cleaners have rallied to take on the infected horrors known as the Ridden and reclaim the world.