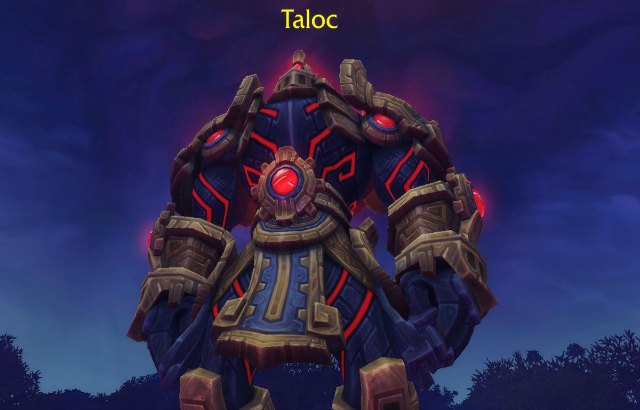 Welcome to this quick Taloc boss guide! The Battle for Azeroth Uldir raid opens tonight, September 4th, and by now players are raring to go. Located in Nazmir on the Zandalar continent, the entirety of the Uldir raid is in an old laboratory and a quarantined place. It’s a dark sanctum of secrets which has been locked away for centuries.  However, with the corruption of the Zandalari, Uldir must be conquered in order to defeat the the final boss: the Blood God G’huun. The first boss of the raid will be Taloc, and below is a brief TLDR guide for players interested in the raid.

Also important to note, tonight’s unlock is only for Normal and Heroic difficulty, with Raid Finder (LFR) and Mythics coming later on September 11th.

Taloc is the first boss of the Uldir raid and has some interesting mechanics for the group, consisting of three different phases and an elevator fight. In this encounter, Taloc the Corrupted fills the room with blood storms that cause shadow damage to players.  His ‘Cudgel of Gore’ can be thrown at enemies to cause shadow damage, and inflict a knock-back ability. He will power down around 60% health, but his damage taken is 99% reduced, so it is imperative to fight the Coalesced Blood and Volatile Droplets which swarm the room.  From this point on, you must fight both Taloc and the adds in order to defeat this boss.

Big thanks to the folks at Fatboss TV for this great visual guide as well.