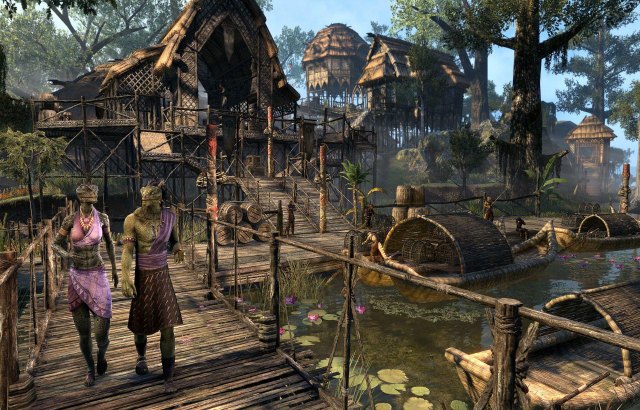 Bethesda announced that Elder Scrolls Online will be getting more content at tonight’s E3 show. The MMORPG will be getting two new DLCs later this year. The first is Wolfhunter, a dungeon themed DLC packed with Werewolf lore. The second is a story centric update like Clockwork City. Murkmire will be the next new zone and story content expansion, taking place in the Black Marsh. More details below.

ESO‘s next DLC game pack, Wolfhunter, will bring two new and challenging group dungeons: Moon Hunter Keep and March of Sacrifices. As its name suggests, these two dungeons are themed around Tamriel’s werewolves, and you’ll be able to dive into all-new stories surrounding those afflicted with the lycanthropic curse and even, perhaps, come face-to-face with the Daedric Prince Hircine himself.

Available later this year, Murkmire is ESO‘s next zone and story content expansion, and it will take you into the home of the Argonians. There, you will win the trust of reclusive tribes, delve deep into crumbling xanmeer ruins, and hack your way through the savage wilds of Black Marsh to discover one of the Hist’s greatest secrets.

Similar to previous DLC zones, Murkmire will feature a brand new area to explore, an exciting story line, new World Bosses and Delves, and a brand-new group arena (with its own leaderboard).

Both DLCs will be available in the second half of 2018, so keep an eye out for more information on both Wolfhunter and Murkmire, including release details and previews, in the not-too-distant future.