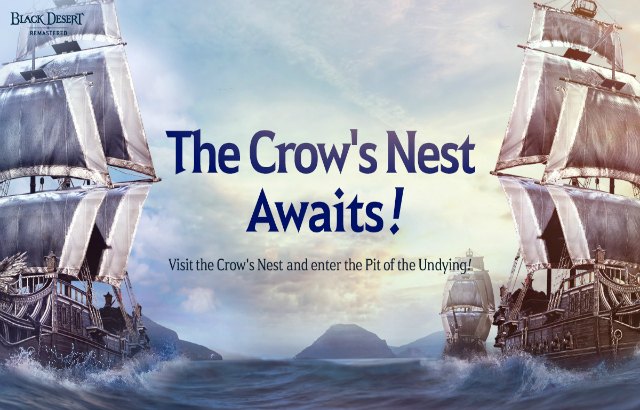 Pearl Abyss announced today that the highly anticipated Crow’s Nest and Pit of the Undying have arrived in Black Desert SEA. Adventurers can now explore a mysterious island and immerse themselves immerse themselves in fierce combat against diverse monsters.

Crow’s Nest is a misty island shrouded in mystery that many brave sailors have searched for but failed to reach. Thanks to the blacksmith of Velia, Adventurers will now have a chance to discover and explore this island by chasing after the strange tales of blacksmith. Adventurers will encounter the founder of the Crow Merchants Guild, the “First Crow,” along with his most valued treasures in the Hall of Heroes. They will also be able to participate in the Pit of the Undying, a new battle arena mode.

Special in-game events will take place to celebrate the Crow’s Nest update. Until July 29, Adventurers who are level 56 or above can complete event quests in Velia to receive buffs and rewards. They can also complete a special Pit of the Undying quest and obtain 10 Seals of the Undying, which then can be used as a key to open the Crow Shop.

In addition, the World Boss Vell, which appeared only once a week, will make an additional appearance on Thursdays until further notice. Adventurers can now enjoy this World Boss Raids more often and collect various rewards by defeating this sea monster.