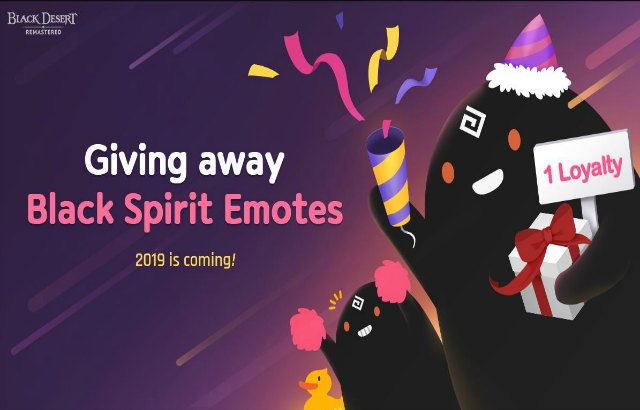 As part of Black Desert’s year-end festivities, and to give back to Adventurers for their support, Black Desert Online SEA is hosting a variety of giveaways and in-game events. To start, from December 29 to January 1, Adventurers can get their hands on the exclusive, first-ever Black Spirit emotes for just one loyalty.

In celebration of the new year, Adventurers can visit Velia to find Lara and complete her quests to receive a Wish Lantern and Box full of Wishes for just one day on January 1. The Box full of Wishes can only be opened by Adventurers who are level 56 or higher for a chance to get exclusive items such as Red Nose’s Armor, Giath’s Helmet, Dandelion Weapon Boxes and other event items.

Also, Adventures that play for at least one hour a day will be rewarded with exclusive items that get better by the day from January 1 to 6. There are also 10%, 20% and 30% discount coupons for all purchases available for just one loyalty from December 26 to January 2.

Black Desert Online is an open world action MMORPG with cutting-edge visuals and skill-based combat that redefines the way we see the genre. Black Desert Online has the most fully developed character customization system of any game that is currently on the market. This feature allows users to break out of the norm and make unique characters that truly represent each and every player. Its intuitive controls, beautifully designed world and extensive lore will excite both newcomers and veterans of MMO games and action RPGs in general. The game has been successfully launched in over 150 countries, is available in 12 languages and has over 10 million registered users. The mobile and console versions are scheduled to launch globally in 2018 and beyond.