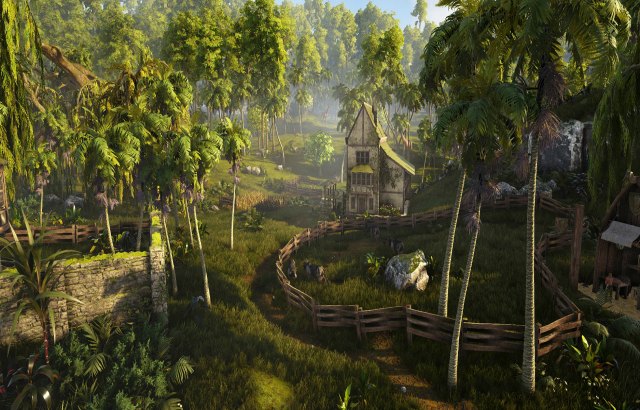 Survival sandbox MMO Atlas has got a massive update in store for all you swashbuckling pirates out there. Today’s free DLC update introduces the new Blackwood expansion map. repare for a dark twist in the Equatorial biome with dark jungles, caves, alcoves, villages, homes, farms, and an interesting array of animals. Wade through thick green waters teeming with dangerous creatures, rare plant life, and the occasional Gorgon to find buried treasure, sunken ships, explore the Mermaid City and experience a new spin on fighting the Hydra and Dragon with transient spawn locations in the new Boss Arena feature.

The ‘Blackwood’ map was created by ISO, the level designer behind ARK: Survival Evolved’s popular mod-map, ‘Crystal Isles.’ ‘Blackwood’ was designed to be used for single-servers as an example of a mod map that can be hosted unofficially. This specific map will be set up so that it still enables all the mechanics that Atlas has to offer, whilst hosting it as a standalone world with no database setup required!

The ‘Blackwood’ patch also introduces a significant functional improvement, allowing Single Player and Non-Dedicated Modes to support the importing and exporting of characters and their inventories, so progress can be retained across maps and servers.

Moreover, to celebrate the DLC, the entire game is currently on sale for 67% off on Steam. The deal will run until Friday, August 2nd so grab it quick.