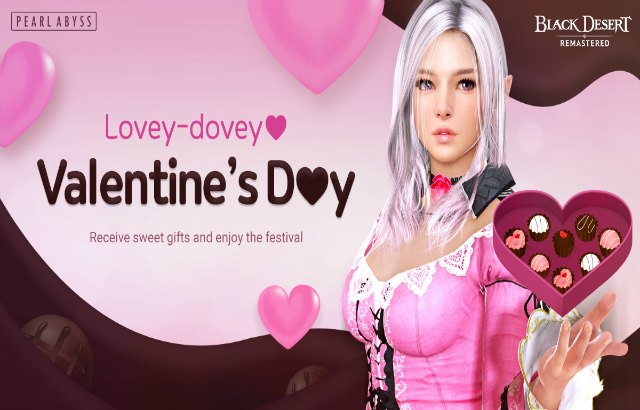 Three new Valentine’s Day events are coming to Black Desert SEA from February 14 to 27. As part of the “Will you be my Valentine?” event, Adventurers can collect Sweet Gift Letters to send to other Adventurers by simply playing the game for an hour, then receive further gifts and items by opening letters and gifts sent by other Adventurers. Upon opening a Sweet Reply, Adventurers will receive a Sweet Chest containing an event item such as a Kzarka’s Sealed Weapon Box, Memory Fragment and much more.

During the same event period, Adventurers can fish for Messages in a Bottle to exchange for exclusive event items worth up to 2.5 million silver or quests for a chance to gain up to 800 Contribution EXP. Also, Adventurers can collect Cacao from defeating monsters as well as gathering to turn into Cacao Powder, then Cacao Chocolate via Simple Cooking. The sweet treat will give Adventurers a chance to boost their Knowledge by 7% and Higher-Grade Knowledge by 3% for 30 minutes. Find more information about all the events here.

Starting today, Adventurers can also confess their love and affection to certain NPCs in the Black Desert world. Leading up to the confession, Adventurers must establish Amity of at least 1,000 with an NPC via gifts. If all goes well, the NPC will accept the confession after careful consideration and the Adventurer will be called the NPC’s lover for a week, after which the relationship will be re-evaluated. All the while, all Adventurers can vie for the same NPC, and having and maintaining the highest Amity will increase Adventurers’ chances of becoming an NPC’s lover. Find more information here.

Finally, Bartali’s Adventure Log has been updated in Black Desert SEA for a more immersive RPG experience. The update brings to life 8 new pages of storylines and quests that Adventurers can explore and conquer for a chance to increase their character AP, HP, Stamina, guild EXP and more. Each of the eight pages will offer Adventurers a chance to win different rewards that will be applied to all characters in the same guild.