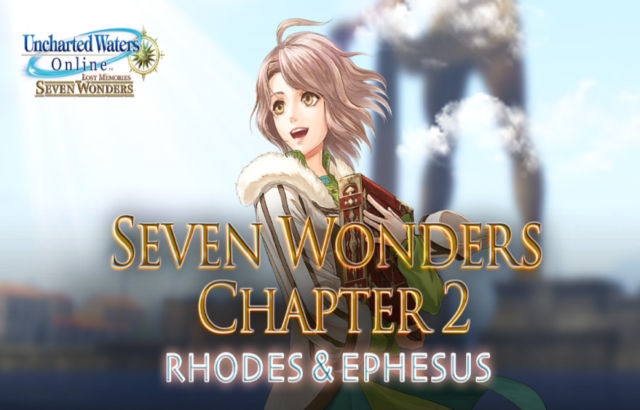 It has been 4 years since Papaya Play took over the stewardship of Uncharted Waters Online (UWO) and it continues to adapt and improve always with its global audience in mind. November 24th marks the release of UWO’s newest chapter which expands “Seven Wonders” and is called “Chapter 2 – Rhodes and Ephesus”. This update builds on the new mechanics and adventures introduced in Chapter 1 and adds its own explosive flair and unique production opportunities.

UWO is a massive historical sailing game set in the exciting Age of Discovery throughout the mid-17th century, when there were still many unknown corners of the globe to explore. Become a Captain of your very own ship and use it however you see fit to make your mark on the world and propel yourself to fame and fortune! It features diverse ways to make a living from trading and exploring to racing and battling pirates or even becoming one yourself. All of these aspects receive refinements and additions in this latest update to Seven Wonders, some of which is described below.

This second chapter of Seven Wonders expands on the “Legacy Themes” introduced in the previous chapter. These require unravelling a complex tangle of historical clues using the mysterious “Book of Wisdom,” then gaining knowledge about and eventually discovering the pinnacles of “Human Heritage”. For the industrious Captain, a new class of specialized production is available for those who wish to master their craft for the power or comfort that lies therein. If instead you thirst for battle on the open ocean, a new skill and class of explosive cannons will add destruction and chaos to your repertoire. All this and more, including a new class of Ships and balances to existing Ships, can be found below:

2 New Legacy Quests
With the continued help from the Book of Wisdom and a cadre of new characters, track down the ancient secrets of our Human Heritage. In this chapter you will stand in the shadow of a towering colossus and uncover the mysteries of an ancient temple.

Pursuit Production + Detonics Skill
Produce and Master a variety of advanced crafting techniques that will create never before seen items and weapons including usable chairs and bonfires that can be placed around town and benefit yourself or your fleet. Using this knowledge in conjunction with the new Detonics skill also allows you to craft devastating explosive cannons which can lay waste to your sea-bound enemies.

Several new high-level buildable ships are now available at the shipyard which only the most experienced of sailors can take advantage of. For all other Captains, a variety of improvements and adjustments have been made to many other buildable ships in order to shift the balance of power in the game.

For more information on the newest expansion: https://bit.ly/7WondersCH2